Turzai Gets the Stewart Treatment, Admits to Poor Phrasing

Ever since the House Majority Leader’s comments on Voter ID at the summer meeting of the Republican State Committee in June, Rep. Mike Turzai (R-Allegheny) has faced a relentless barrage of criticism from media outlets across the state and country who saw it as a “gotcha” moment for the Republicans.

The story even got picked up by Comedy Central’s The Colbert Report. And last night, Colbert’s earlier counterpart, late-night comedian Jon Stewart, used the remarks in his own Daily Show segment that lasted over 8 minutes – a solid portion of the show – called “Wizards of I.D.,” that dealt with implementation of voting laws nationwide.

The first part of the show, which can be viewed here, opens with Stewart saying, “There is one problem in our great country that stands out perhaps above all others: voter fraud.” 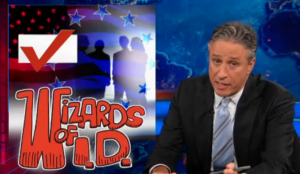 The scope of the problem? “I’m gonna say it’s bigger than ringworm, and less than Beiber fever. Actually, I didn’t even know we had a voter fraud problem in this country. Conservatives and their media division are up in arms over voter fraud and this year, almost entirely in swing states with republican controlled legislatures, are doing something about it.”

Stewart said states are spending millions to fight voter fraud despite the fact that a group supporting the law – the National Republican Lawyers Association – found only 340 cases over a 10-year period.

“That’s almost .7 cases per state per year,” Stewart said, “which also includes registration fraud, which voter ID would not address.”

This is where Stewart begins to focus on Pennsylvania’s law, referencing the case against the Commonwealth in which the state agreed to some stipulations that said the Commonwealth is unaware of any in-person voter fraud (the kind the Voter ID law prevents), and that they could not argue that, without the law, voter fraud would occur.

“I rest my case, your honor,” said Stewart. “It doesn’t happen, this won’t stop it. I think you can see why we have to do it now. Next up, leash laws for unicorns!”

The next chunk of the discussion suggests Republicans are throwing money at a problem that doesn’t exist, while they could be focusing on problems that have real factual evidence – like global warming. The show then cuts to a clip of Mitt Romney saying no one knows what causes it, and that it would be foolish to throw money at it without knowing.

Stewart continues to damn the Voter ID argument, showing comments made by John Fund at the conservative think-tank Heritage Foundation, saying that liberals can make a fair argument that while massive voter fraud normally involved absentee voting, that conservatives ignore absentee ballot fraud because they like absentee voting more.

Stewart laughs, “I guess it would be a fair argument, or, as it is sometimes also called, ‘justification for a lawsuit.’”

So if absentee ballot voting benefits Republicans, who are they targeting, Stewart asks, as the segment cuts to a news anchor saying that such laws burden minorities, the poor, elderly and students.

“Yes! finally the free ride for these (people) is over!” Stewart exclaims.

He said the only thing “more blatant would be if you had some Republican State Rep from Pennsylvania touting how Voter ID laws would hand the election to the Republicans.”

At 2 minutes in, this is where Turzai’s comments are again put before the audience.

“Voter ID, which is gonna allow Governor Romney to Win the state of Pennsylvania. Done.”

Impersonating Turzai, Stewart says, “No one is videotaping this right? ‘Cause I’m gonna look like an asshole.” The audience laughs and applauds.

Certainly Turzai knows all that is being said about the law and his comments – and him personally. So in the roughly two months since he made those remarks, what has changed?

His Press Secretary, Stephen Miskin, said it was very obvious to the Majority Leader from the outset that he should have added another sentence to his statement to clarify what he meant – that the Voter ID law creates a level playing field which makes national Republican candidates more competitive.

“Obviously from the very beginning, it’s been mischaracterized,” Miskin said, who added that the state Rep. didn’t add to his statement at the committee meeting “because of who he was speaking with. They already knew the context.”

Misken also said that Turzai stands by the law, which will ensure that only citizens and registered voters should be allowed to vote, period, and that the legislature has been working since 2001 to strengthen the integrity of the vote.

“We do believe there’s been fraud. It’s been proven,” he said. “Despite what Common Cause and the ACLU say.”

Miskin said that all the bad publicity Turzai has been receiving since the video of his statement went viral will mean only one thing.

“This has ended people talking off the cuff. Now you’re just going to see staged events. And how is that going to do the people any good?”

Miskin maintains that Turzai realized his phrasing was poor, but that the Rep stands by the law.

“When the graveyards of Philadelphia are no longer on voter registration lists, and (people) can’t ‘vote early and vote often,’” Miskin said, Mitt Romney stands a chance in a state that hasn’t voted for a Republican presidential candidates since 1988.