Turzai on Liquor Store Privatization: “Is This a Core Government Function? I Don’t Think So.” 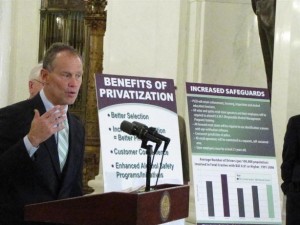 Turzai spokesman Steve Miskin said his boss took the somewhat unorthodox step of testifying before his legislation has been introduced because it would provide a good forum in which to explain the plan to colleagues.

Turzai has been pitching his proposal as a much needed reform and a great benefit for consumers – points he hammered home on Wednesday.

“Change is always difficult, but that doesn’t mean we shouldn’t do it,” he said.  “If ever there’s an opportune time to show that we are not doing business as usual in Pennsylvania and that we are actually focusing on our constituents and our consumers and can do some good things as a result now’s the time.”

Governor Gifford Pinchot originally designed the current system to make purchasing alcohol as “inconvenient and expensive as possible.” Pinchot delegated the Liquor Control Board to carry out his plan.

Turzai has characterized the current system is an outdated relic of Prohibition policies and an overreach of government.

“Should Pennsylvania be in the business of selling alcohol? Is this a core government function? I don’t think so, and the large majority of Pennsylvanians agree. The current system is antiquated and out of touch.  It’s time to end the statewide monopoly and give consumers better selection and more convenience.”

The second group of detractors dislikes the Turzai plan specifically because of the process it recommends – auctioning off 1,250 licenses to private retailers and replacing the current 621 state stores. Turzai believes this will bring in $2 billion in state revenue.

“I don’t think that we have allowed the Liquor Control Board to run like a business,” Scarnati said.  “We’re the ones with the handcuffs on them, and then we’re out there saying, ‘Well, this is an archaic, terrible system and doesn’t work.’  Well, take the handcuffs off of them, get the bottom line better, and you’ll get a better price.”

Still others argue that replacing the current tax system will lead to a drop off in revenue. Under Turzai’s plan, the 18 percent Johnstown Flood Tax and the Pennsylvania Liquor Control Board’s 30 percent markup would be replaced with a per-gallon tax between 8 and 12.5 percent. Turzai believes the new tax would end up being net neutral to the old system.

At the hearing, that assertion was questioned. “You believe that, when it goes private, that we’ll get all those taxes, we won’t have to hire any new people at the Department of Revenue?” asked Representative Dante Santon (D-Philadelphia). “Have you checked with the state treasurer or state attorney general to see what losses we might experience under that system?”

These opposition factions have gained ground of late. Scarnati decided not to make liquor store privatization a high legislative priority and last week state Representative Mike Sturla (D-Lancaster) predicted it would not garner enough support to pass the Senate.  “School vouchers have a better chance [of passing] than the privatization of liquor,” he said.

So far Governor Corbett has not taken a position on Turzai’s plan. Corbett spokesman Kevin Harley explained that Corbett was waiting for a report from consultant Public Financial Management Inc., which would allow the Governor to analyze the implications of several approaches to privatization.