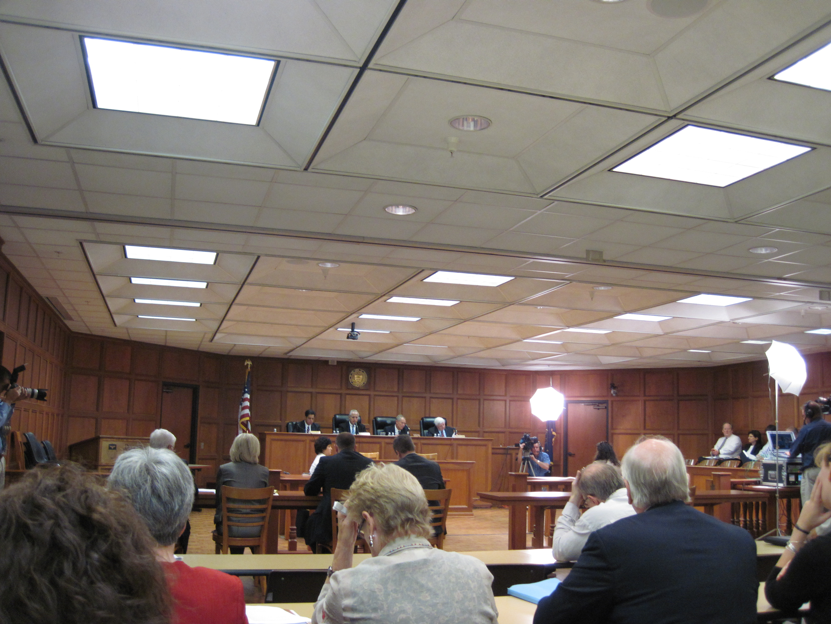 Some would call it putting in a last request.

Constituents came before the Legislative Reapportionment Commission at a public hearing today held at the Duquesne University School of Law to try to keep district seats from leaving western Pennsylvania in the wake of shifting population trends.

House Majority leader Mike Turzai (R-Allegheny) stressed the importance of collectively agreeing on how Western Pennsylvania’s districts should be redrawn.

Turzai said he was working for a unanimous vote on the plan.

“Historically, this is what we aim for and we the panel label this as our number one priority. I am certain that if we follow constitutional mandates, unanimous consent will be the result.”

The movement of Pennsylvanians out of southwestern Pennsylvania and growth in central and eastern parts of the state makes many Allegheny county voters nervous that districts may be shifting away from their region.  Traditionally, political district boundaries are adjusted to reflect numbers of residents in certain geographic regions.

Unlike congressional redistricting, the final plan requires only a majority of support on the five-member panel – not a vote by the PA House or Senate. Recent court decisions have made the rules governing the process much stricter, including the allowable deviation from the target population of each district

People arrived from all over the area to testify about issues they feel should be taken into consideration when reorganizing Western Pennsylvania’s districts.

In addition to the general concern that western PA was losing out, Overall trends in the testimonies revealed concerns over women losing representation in the House and Senate, and minority voices being diluted within larger more homogeneous districts. Most people stated, either implicitly or explicitly, that they did not want to lose the 22nd PA House district (the Brookline neighborhood in the South Hills of Pittsburgh).

Her likely move to the office of Allegheny County Controller later this year leaves her district seat vacant, a convenient solution for those who want to move seats from western to eastern Pa. However, she indicated that she will be throwing her support behind another female to run for her seat, and asked the committee to take women’s representation into account when deciding on redistricting.

Chelsea Wagner also warned of the dangers of cutting up the close-knit community of the 19th ward. Openly defending her district, she said, “If the 22nd district must be placed elsewhere, you should make sure that the communities closely associated with each other stay together”. Wagner also acknowledged that the “greatest loss of population occurred here” but that we still need the “eight urban districts to represent the urban core”.

“Losing a seat held by Chelsea Wagner would take away from the voting power of the city of Pittsburgh.” He asked that the commission look beyond the population criteria when deciding on new districts so as not to lose the diversified voice of the 22nd district. “Do not dilute our voice,” he urged, “so that we can continue to grow as a region and as a city.”

Selena Schmidt, Executive Director of Power 32, also stressed the importance of protecting the diversity of the region, which has experienced a dramatic uptick in the areas surrounding Pittsburgh.

Schmidt explained, “the growth in the region is dependant on the success of our urban core, and the thriving urban conversation needs to be represented in our legislature.”

The panel members repeatedly stated that the purpose of the hearing was not to answer or ask questions – it was merely to listen to the complaints, concerns, and suggestions made by the concerned constituents of Pennsylvania.

Mr. Turzai, made it vehemently clear that he and the panel were not present to answer questions, but to only listen. Repeatedly, he stopped inquiring constituents when directly asking questions with, “You may ask your present question, but, we will not reply. I suggest that you follow your question with the answer you wish to hear from us so that we the panel can take into consideration your thoughts and suggestions on the redistricting process.”