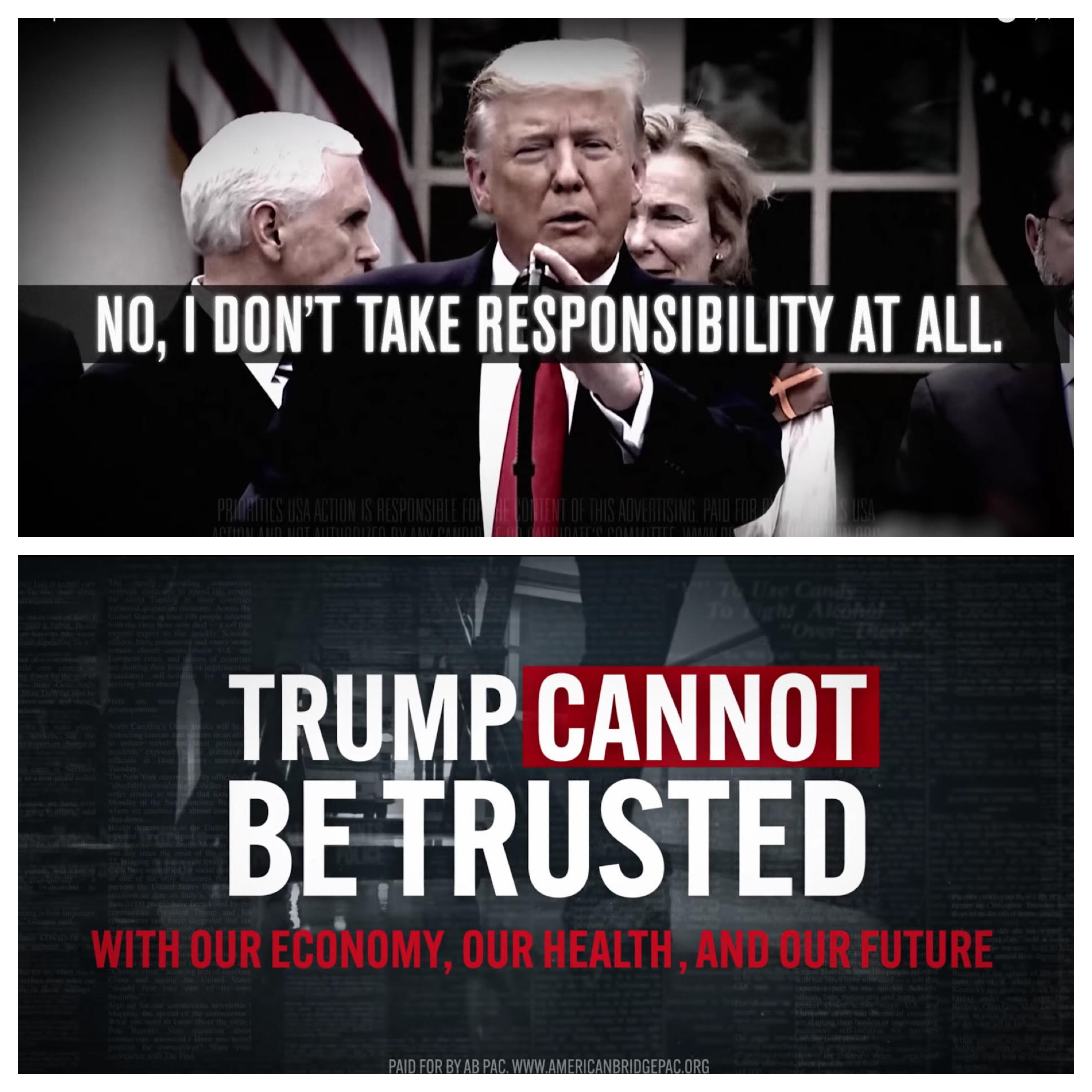 A pair of Democratic super PACs are on the offensive over President Donald Trump’s handling of the coronavirus pandemic in a series of newly released ads.

Priorities USA, a Democratic super PAC that has pledged to spend $150 million in several battleground states in 2020, and American Bridge, which describes itself as “the largest research, video tracking, and rapid response organization in Democratic politics,” both are slamming Trump in ads airing in just a few states, which includes Pennsylvania.

Priorities USA’s approximately $800,000 ad buy in Pennsylvania features four ads, two for television and two on digital platforms, that include clips of Trump talking about the coronavirus in past weeks and ads boosting former Vice President Joe Biden’s response to it.

Their 30 second television spot, “Exponential Threat” which will begin running in Florida, Michigan, Pennsylvania, and Wisconsin on Tuesday and will last for the next few weeks according to a spokesperson from Priorities USA, includes clips of Trump speaking about the virus until the conclusion of the ad with the texts reading, “America Needs A Leader We Can Trust.”

“The coronavirus,” Trump says at the beginning of the ad. “This is their new hoax.”

“We have it totally under control, it’s one person coming in from China,” Trump says as the ad continues. “One day, it’s like a miracle, it will disappear. When you have fifteen people and within a couple of days it is going to be down to close to zero.”

“We really think we’ve done a great job in keeping it to a minimum,” Trump says while the screen displays a chart of the increase in confirmed cases of coronavirus in the country over the past month.

Priorities USA’s other two ads in this buy, “Better Prepared” which is a 30 second television ad, and “Steady Leadership” which is a 15 second digital ad, both aim at touting Biden’s response to the virus.

According to a spokesperson for Priorities USA, these ads, like other ads currently running in the state from the group, will be broadcasted in the Pittsburgh, Harrisburg-Lancaster-Lebanon-York, Wilkes-Barre-Scranton, and Johnstown-Altoona markets.

While those ads are set to launch on Tuesday, American Bridge began their ad buy on the matter on Friday with two digital ads, one 30 seconds long and the other 60 seconds, both titled “Failed To Act.”

Both ads feature various clips of Trump speaking about the virus and begin with a voiceover claiming that Trump didn’t respond appropriately to the matter.

“The warnings were there,” the voiceover says to begin both ads. “Millions of Americans at risk, But Donald Trump failed to act.”

The ads are currently running in Michigan, Pennsylvania, and Wisconsin. According to a spokesperson for American Bridge, this five-figure ad campaign in the state, which is a part of their larger $850,000 digital buy announced a few weeks ago, is expected to run for a week to target “potential Trump defectors.”

Both the Republican National Committee and the Pennsylvania Republican Party lauded Trump’s response to the virus and accused Democrats of trying to “politicize” the pandemic.

“President Trump is taking decisive actions to flatten the curve, like shutting down our borders, partnering with the private sector to expand testing, and providing aid to states, individuals, and businesses,” said RNC Spokesperson Michael Joyce in a statement to PoliticsPA. “Meanwhile, Pennsylvania Democrats continue to politicize COVID-19 and refuse to work with President Trump to keep Americans safe.”

“We at the Republican Party, our staff, members, legislators, and candidates are entirely focused on finding ways to be of service,” said Vonne Andring, Senior Advisor / Acting Executive Director of the PAGOP to PoliticsPA. “We fully recognize the gravity of this extraordinary crisis — and we stand 100% behind our President and his team as they fight to combat covid-19. As people are experiencing unprecedented fear, confusion, hardship, and loss, the “politics as usual” of American Bridge, Priorities USA, and their funders is unimaginably insensitive and counter productive.”

A Real Clear Politics poll averaging polls from March 4-19 show that 47.6% of the nation approves of Trump’s handling of the coronavirus, while 46.6% disapprove.