The United Food and Commercial Workers Wine and Spirits Council is airing two new television ads with corresponding radio segments as part of their effort to halt GOP plans to privatize the state liquor stores.

The UFCW represents the interests of state liquor store employees and their advertisements fan the flames of the debate on privatization of Pennsylvania’s liquor stores currently taking place in the Senate.

The ads both condemn attempts to pass a liquor reform bill. 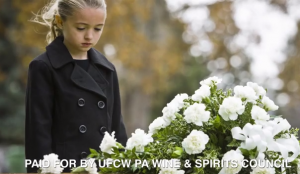 “You’ll never see me graduate high school. A drunk driver took your life, and changed mine, forever,” says a little girl via voiceover.

An adult narrator cuts in: “Thanks to current laws, and the effectiveness of the wine and spirits stores employees, Pennsylvania has the lowest death rate associated with alcohol consumption in the nation.”

“Tell your state senator to say no to liquor privatization. We don’t want other children to lose their parents.”

UFCW President Wendell Young says the ads are statewide and part of an ongoing media push that so far has spent over $1 million. They were produced by Strategic Communications Consultants in Blue Bell.

The second (below), titled Fiscal Conservative, has a watermarked photo of Tom Corbett while the announcer declares the “liquor privatization scheme” doesn’t make sense.

“The stores make over $100 million a year in profits, money the state needs to balance the budget every year.”

Gov. Corbett has made privatizing the state stores one of his signature legislative efforts for this year.

The radio and television ads use the same scripts.

Nathan Benefield, Director of Policy Analysis for the Commonwealth Foundation, a free market think tank in favor of privatization disputed the numbers in “Daughter.”

“The ads are ridiculous and manipulative. Simply a scare tactic not supported by the evidence,” he said. “The ad focuses on DUI deaths, but then cites a stat that has nothing to do with drunk driving.”

He said the figure for alcohol induced deaths “doesn’t include traffic accidents from DUI’s, only certain conditions like alcoholic liver disease and alcohol poisoning.”

The state House passed its version of liquor privatization in March and is now up for consideration in the Senate where it faces significant hurdles – from Republicans. The bill would allow for changes in the amounts available for sale at bars and distributors, the divestment of state owned liquor stores, and the sale of alcohol in some grocery stores. Hearings on the bill in the Law and Justice Committee ended on Tuesday.