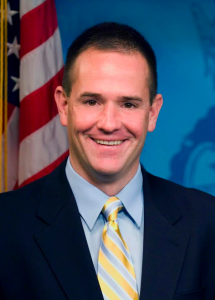 State Representative Kevin Haggerty (D-Lackawanna) was on leave from the House yesterday following a protection order petitioned for by wife Jennifer Haggerty.

According to the Scranton Times-Tribune,A protection from abuse petition was filed Friday after claims from Jennifer that her husband attacked her Thursday night.

Jennifer claims this was not the first time the lawmaker acted aggressively towards her, citing other instances of abuse, including some done in front of their children.  Rep. Haggerty allegedly hit his wife in the head, causing numbness in her face and hearing loss, in the attack that caused her to file the petition

Judge Trish Corbett issued the temporary protection from abuse order Friday, and scheduled a hearing for May 31st.

Haggerty declined to comment but issued a statement through his lawyer, Frank J. Ruggiero.

“The allegations raised against Mr. Kevin Haggerty are of a personal nature between his wife, Jennifer and himself,” Ruggiero wrote the Times-Tribune.

This is not the first trip to court for Haggerty. Lawsuits have been filed against Haggerty concerning repayment of campaign-related money, including one filed recently by a Dunmore man suing over $5,000 he lent Rep. Haggerty for his 2014 campaign election.

Haggerty represents the 112th House district. He won his first election bid in 2012, but after House districts 112th and 115th were merged Haggerty lost in a primary to state Representative Frank Farina in the 2014 Democratic primary.  Haggerty defeated Farina in 2016 to retake the seat.

Update: As of May 30th, Rep. Haggerty has been cited with simple harassment after his wife received a protection from abuse order against him, following an alleged fight in their home on May 18th. He was not charged with assault because his wife had no visible signs of injury, according to Prosecutors. Rep. Haggerty will be fined by Lackawanna County for his citation. Haggerty was scheduled to appear in family court this morning for a hearing on the protection from abuse order, according to WNEP. Since the incident, Jennifer Haggerty has filed for divorce from her husband.