The Obama camp has released a second ad today to complement the first ad that dealt with Romney’s record on outsourcing. This ad, “Mosaic,” deals with Romney raising taxes and fees on the middle class as Governor.

The ad opens with another clip of Romney from 2002 when he was running for the office.

But then the narrator speaks over an image of Romney boarding an airplane.

“As Governor, Mitt Romney did cut taxes…on millionaires like himself.”

The narrator then says Romney raised taxes and fees by more than $1.5 billion during his time as Massachusetts governor.

The more than 1,000 fee hikes dealt with issues such as health care, milk and lead poisoning prevention. A press release accompanying the ad said that residents’ tax burdens went up by 30 percent, or $1,200 per person, during his time in office.

As the narrator goes on to list more than a dozen related areas for which fees increased, images of people affected by the fee hikes fly at the screen and then fade into the background, forming a picture of Gov. Romney’s face.

The ad concludes with the tagline that Romney Economics didn’t work then, and won’t work now.

Hartwick said that Romney is trying to erase his past record so as to give himself a better shot at winning over middle America, using a gaffe committed by a senior Romney campaign adviser in March.

“He’s trying to Etch-a-Sketch a record that is not in the interest of 99 percent of Americans and the working class,” said Hartwick. “He raised taxes and fees more than one thousand times, over $1.5 billion.”

But the Romney camp has dismissed these ads as a distraction to Obama’s record of high unemployment and decreasing incomes. 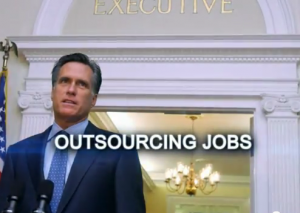 Dems have been hammering Mitt Romney for his time at Bain Capital and his time as Governor. Obama’s latest ad bridges the gap.

Although polls released as recently as last week show Obama up by six points in the state, voters in Pennsylvania continue to see Romney as being better apt to handle the economy.

And so, Obama for America released a new ad today in which they continue to beat the job creation drum, tying Romney’s record of outsourcing, both at Bain Capital and as Massachusetts Governor, together in a single fluid motion.

This ad uses the conventional wisdom and campaign slogan for Romney Economics, that “it didn’t work then. It won’t work now.” And so the ad opens with a shot of Mitt Romney circa 2002, with the narrator emphasizing Romney’s campaign for Massachusetts governor – on a job creation platform.

It then cuts to another photo, this one from Romney’s time at Bain Capital.

“But as a corporate raider, he shipped jobs to China and Mexico,” the narrator says. “As Governor, he did the same thing…outsourcing jobs to India.”

The narrator then says that Romney will continue this pattern because, “Now he’s making the exact same pitch” for the presidential election.

The song and dance continues: cue Romney saying one of his more infamous quotes: “I know why jobs come and why they go.”

Pa.’s Obama campaign spokeswoman Jennifer Austin said the premise of the ad is that a President Romney would apply private sector principles to the public sector, and watch potential jobs go overseas to be sacrificed for profit. Hence the ad’s name, “Come and Go.”

“When Romney ran for governor, he promised that he would use the values he learned in business to create jobs,” she said. “But ‘Come and Go’ makes clear that he broke that promise and left Massachusetts worse off.”

Austin said that Obama, by contrast, fights for American jobs that benefit everyone.

“That’s why he’s focused on tax relief for middle-class families and small businesses while paying down the deficit.  And he’s fighting to keep teachers on the job and putting construction workers to work rebuilding our roads and bridges, ports and railways.”

Meanwhile, Mitt Romney just wrapped up his “Every Town Counts” tour, where he visited six states he hopes swing in his favor come E-Day. The Republican National Committee said in a press release that although President Obama won those states in 2008, Romney’s momentum is building.

RNC Political Director Rick Wiley said a stagnant economy and out of touch President put PA and other states in play.

“[Obama’s] broken promises and his out-of-touch statements on the economy have left voters frustrated, disappointed and ready for a new direction. Like the private sector, his campaign is not ‘doing fine.’”

The message that Obama does not understand the middle class’ economic woes is one that has resonated across all battleground states, Wiley said.

“Voters have recoiled from President Obama’s tax-and-spend policies that have grown government and slowed economic growth. They sent a clear message in 2010, and because President Obama hasn’t listened, they are poised to send another message in November by sending him home to Chicago.”

The “Come and Go” ad is to be aired in four of the six states Romney just visited (New Hampshire, Pennsylvania, Ohio and Iowa) as well as in Virginia, North Carolina, Florida, Colorado and Nevada.