A new Super PAC is on the air in Pa., taking aim at U.S. Senate front runner Tom Smith. The 30 second spot, from the Freedom Fund for America’s Future, hammers Smith on his Democratic past.

“Fact: Tom Smith claims to be a Republican. But before running for Senate, he was a Democrat for 42 years, curiously converting just months ago,” a narrator says. 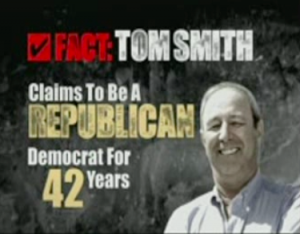 “Fact: Smith raised taxes on Pennsylvanians when he was a local politician. Not once, but 9 times.”

The charges in the ad are the same as those being leveled at Smith by his opponents, most notably Steve Welch.

In response, Smith’s campaign released its own ad today. It rebuts the IE as well as Welch’s most recent ad – which contains the same lines of attack.

“Voters aren’t falling for liberal Steve Welch’s negative attacks on lifelong conservative Tom Smith, so it’s no surprise Welch is polling in a distant third place,” said Campaign Manager Jim Conroy. “The truth is that Tom Smith has supported conservative candidates and causes for decades, while Steve Welch was voting for Barack Obama and raising money for ultra-liberal Joe Sestak.”

The Freedom Fund for America’s Future was formed on March 19, and received only on contribution prior to the April 4 pre-primary reporting deadline – meaning that its funding sources are unknown at present.

The only clue from its FEC filings is a $5,000 receipt and $5,000 disbursement on the same day – to Long/Nyquist Consulting in Harrisburg.

A GOP media consultant close to the Smith campaign said his sources saw the fingerprints of Brabender/Cox on the buy. The firm has firewalls in place between his work and that of employees working with IEs, says Welch media consultant John Brabender.

Update: an FEC filing confirms that Brabender/Cox did produce and place the ad. The buy totals a hefty $145,000.

Presently, the ad is airing only in the Johnstown market. The consultant said it was running at a health 800 gross ratings points, meaning the buy figures between $30,000 and $35,000.

Update: the ad will also appear on cable (Fox News) in Philadelphia, Pittsburgh and Harrisburg.

Another Republican media consultant said, should the ad air solely there, it could be an effort to prevent Smith from reaching critical mass in his geographic base in western Pa.

“Fact: Tom Smith claims to be a Republican. But before running for Senate, he was a Democrat for 42 years, curiously converting just months ago.

Fact: Smith has even donated thousands to liberal Democrats.

Fact: Smith raised taxes on Pennsylvanians when he was a local politician. Not once, but 9 times.