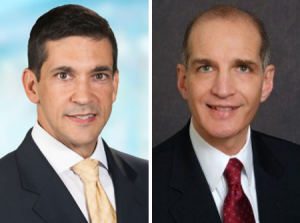 A battle is brewing within the PA Republican Party for the first time since 2006. Rob Gleason is stepping aside after a decade as Chairman and two well-connected party insiders are vying to replace him. Chester County GOP Chairman Val DiGiorgio and GOP General Counsel Lawrence Tabas are making calls, recruiting supporters, and promoting endorsements.

State committee members will elect one of them at their Feb. 4 meeting. In the meantime, regional groups across the state have already weighed in via straw polls and letters.

Update: the Northwest and Southwest caucuses voted Saturday morning. Final totals are below.

Editor’s note: The Central caucus did not hold a straw poll in the race for Chairman. Subsequently, 6 county chairmen signed a letter of endorsement for DiGiorgio and 51 committee members signed a letter endorsing Tabas. PoliticsPA initially included these numbers in the chart above to reflect the state of the race, and added this note for clarity.

The winner will set the direction of the state party for the next four years. The Chairman oversees fundraising and field strategy and represents Pennsylvania at RNC meetings along with the two national committee members.

PoliticsPA talked with both candidates about their plans if elected.

DiGiorgio is a partner with Stradley Ronon where he specializes in financial services. He served two terms as Chester County Controller and has served as Chester County Republican Committee Chairman since 2011.

“The main job of the State Party is to strengthen the county party organizations,” he said, including fundraising and staff support. “As a former grassroots activist, I know their challenges.”

He said his focus would be on building the Party’s grassroots network, and direct the focus of the Party on statewide judicial and row office elections.

“We have had a lot of success in Chester County running our row office candidates as a team out of our headquarters, and that approach will benefit the statewide ticket,” he said.

“I want to change the way the State Party runs its judicial and row office races. With the judicials this year, I want to build a team that will coordinate messages and fundraising through the State Party.”

“I want to build stronger relationships with legislative leaders in Harrisburg, and make sure they are a part of the team,” he continued. “They have an interest in making sure we have a Republican Supreme Court and Republican controlled row offices.”

“I have done everything that a state chair does, and have been successful at it.”

Tabas is a partner with Obermayer Rebmann Maxwell & Hippel LLP, specializing in health and election law. He is the PAGOP’s current General Counsel, a role he has held since 2005.

He stressed the need for party unity and off-year infrastructure.

He said the next chairman should capitalize on the enthusiasm around the presidential race.

“We need to continue to build off the momentum we built in 2016 with Donald Trump. He brought over 300,000 new Republicans into the party last year, and we need to keep those people engaged with the party in non-presidential years,” Tabas said. “We need to go out into the communities that we have not traditionally done well and and engage those voters.”

Specifically, Tabas said he wants to improve the party’s use of technology and data, including for fundraising.

“We will completely revamp our efforts by incorporating more data into all aspects of what we do. In my professional life as a healthcare lawyer we use data constantly to determine everything, and that is what the State Party should be doing,” he said.

“I am ready to start work on day one. If I am elected on the morning of February 4th, I will be working that afternoon.”