A new ad from Democrat Kathy Boockvar’s campaign says that Rep. Mike Fitzpatrick (R-Bucks) has chosen the wrong side in the so-called “War on Women.” 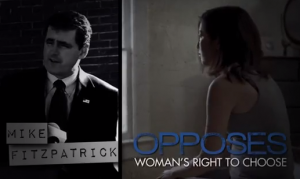 The ad, titled “Shameful,” hammers Fitzpatrick for a voting record when it comes to protecting women, most notably, health, violence, and abortion issues.

“Congressman Mike Fitzpatrick wants to roll back decades of progress with policies that hurt Pennsylvania women,” the ad’s female announcer says. “Fitzpatrick voted to weaken the Violence Against Women Act. He’s opposed a woman’s right to choose, even in cases of rape and incest. And Fitzpatrick even voted to defund Planned Parenthood, robbing women of cancer screenings and other life-saving care.”

Fitzpatrick has defended his voting record on women’s rights. His campaign also released a web video, citing wife and three daughters, and his advocacy on behalf of abused women, as reasons why he is the right choice for women.

Fitzpatrick Campaign Manager Faith Bender emphasized his work on behalf of abused women. “Also,” she said, “Mike wrote the Rape Prevention and Education Grant Program Act of 2005 to create $80,000,000 of funding for prevention and education.”

She also rebutted the VAWA charge.

The Violence Against Women Act (VAWA) reauthorization has been a common bullet point in Dem campaigns this cycle, but it could be misleading. Almost all Republicans did vote against one of two versions of VAWA: the Senate-passed version which would have expanded the law to include the protection of Native Americans, undocumented immigrants and lesbian, gay and transsexual individuals. But, shortly after, Fitzpatrick and the GOP voted to reauthorize a version a VAWA that more closely matched the original.

Update: Fitzpatrick also unveiled a new ad on Wednesday, a heartstrings spot about Fitzpatrick’s effort to help a family whose tragic loss was compounded by red tape.

“The ad is about helping Bethann McIntosh, a widowed mother of two whose husband died in the line of duty.  In March of 2010, Bensalem Paramedic Daniel McIntosh responded to a 911 call where a dangerous caller fled the scene to potentially harm their neighbors. In recognizing the danger the caller posed, Danny Mac suffered a massive heart attack and died in the line of duty while chasing the dangerous caller.  Unfortunately, because of a tragic oversight in the laws governing the program, Danny Mac’s family was denied the death benefit they deserve because he was serving on an ambulance run by a non-profit, not a municipality.  Mike Fitzpatrick passed the Danny Mac Bill out of the House unanimously to fix the program to cover widows and other spouses like Bethann.”