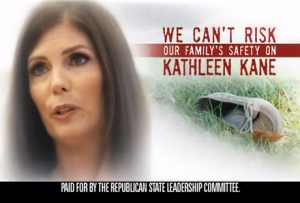 Update: The ad is the hardest-hitting of any so far this cycle, depicting a teenage girl being abducted by someone in a white van.

“Kane also went soft on a rapist of a 16-year old, who was released and later assaulted two more women,” says an announcer, ominously. “We just can’t risk our families’ safety on Kathleen Kane.”

Kane has here efforts to combat child sexual abuse a major theme in her campaign, particularly in the light of the Jerry Sandusky case.

“Dave Freed and Tom Corbett have chosen to launch a vicious and untrue attack on prosecutor Kathleen Kane because Freed has been trailing badly in multiple public and private polls. These Harrisburg guys like Freed and Corbett will do anything to stay in power and prevent there from being an independent Attorney General.  It says a great deal that Freed isn’t even attempting to make a positive case about his own record, but is instead unleashing his allies to smear Kane’s record as a tough prosecutor.”

According to two sources, one Democrat and one Republican, the ads will begin tomorrow and air through September 29, entirely in the Philadelphia broadcast market.

Update: Chris Brennan of the Daily News confirmed the buy via Federal Communications Commission filings. He crunched the numbers and found that the group is spending $393,400 to air commercials on 6ABC, NBC10 and Fox29.

PoliticsPA is presently seeking official confirmation from the group behind the ad, the Republican State Leadership Committee, and its affiliated Republican Attorneys General Association (RAGA). It appears that the buy will be an independent expenditure, meaning that the group has not coordinated with Freed’s campaign.

The Kane campaign declined to comment before seeing the ad.

The content of the ad is unknown, beyond the fact that it’s a negative ad against Kane. But ultimately, the substance of the attack may be familiar.

Back in April, the RAGA launched a website meant to criticize Kane’s record as an assistant District Attorney. The site is currently down for maintenance, but it was essentially a rehash of arguments made by Kane’s primary opponent, former Congressman Patrick Murphy. Namely, the group said that Kane’s biggest campaign talking point, that she prosecuted over 3,000 cases, was deceitful given her later remarks that she took just 24 cases to trial. (RAGA’s April claim that Kane was deceitful is unfounded – her campaign for the most part carefully said ‘prosecuted,’ not ‘tried.’)

Kane’s high-profile primary win against Murphy – and the television ads that brought her to victory – gave her a name ID advantage over Freed. In every poll since, including one commissioned by the Philadelphia Inquirer in late August, Kane has held a comfortable lead.

In any case, expect to continue to hear about Kane’s 3,000 cases. Even if RAGA doesn’t go there, Freed might. He told the Pa. Press Club that the Cumberland County DA’s office oversees about 4,000 cases per year, meaning that since taking office in 2006 he can claim to have had a hand in prosecuting over 20,000 cases.

So why the national interest? With the presidential race and U.S. Senate race one the wane in Pa., it appears to be the most competitive statewide race this year.

Plus, GOP operatives almost universally identify the AG contest as the 2012 campaign most prioritized by Gov. Tom Corbett, himself the immediate past AG. Republicans have held the office since it first became an elected position in 1980. If Kane, a Democrat, were to win the position and make old files public, it could mean renewed criticism about Corbett’s handling of everything from the Bonusgate investigation to the Sandusky case.