Update: The ad above will be the one to air in Pa. It focuses on President Obama’s stance on coal. It also dovetails nicely into Tom Smith’s latest ad.

The ad’s focus means that Romney’s campaign is likely to aim its ads at western Pa., rather than the expensive Philadelphia market where coal doesn’t move numbers. 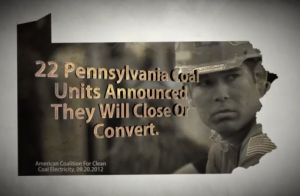 Mitt Romney’s television ads  will soon be on television in Pennsylvania, his campaign confirmed Tuesday.

“As the Romney-Ryan message continues to resonate and GOP momentum continues to build, we are adding Pennsylvania to the long list of states where we are expending significant resources in order to bring real recovery to the country, while continuing to implement and fund full-scale efforts in all the target states,” wrote Romney Political Director Rich Beeson in a memo.

Details – including the specific size of the buy – haven’t been announced. But the move follows other last-minute action in Pa. from two GOP super PACs, Restore Our Future and Americans for Job Security, which will spend a combined $3.2 million here.

Karl Rove, whose super PAC Crossroads GPS has been a significant player nationally, is also looking at a Pa. buy he said Tuesday.

The Obama campaign said it would match the $3.2 million already announced GOP spending, and PoliticsPA is seeking a response to the Romney announcement.

However, it looks like Republicans are less interested in actually winning Pa. than they are in forcing President Obama’s campaign to spread its resources.

“The Romney campaign has the resources to expand the map in ways that weren’t possible in past cycles (without reducing any effort in any other target state),” Beeson said.

“While the Obama campaign would like to wish it is 2008, the reality is that they are now forced to ‘play defense’ in least six states (Pennsylvania, Minnesota, Colorado, New Hampshire, Iowa and Wisconsin) that they once believed were ‘safe’ Obama wins.”

He also noted that Romney is poised to overperform past Republican presidential hopefuls in southeast Pa. and western Pa. and that the GOP’s success in 2010 puts the state in play.

Beeson cited remarks by Pa. Governor-turned-pundit Ed Rendell that Pa. could be a surprise win for Romney. President Obama’s campaign sent around a quote by Rendell saying that isn’t so:

“Let me make myself clear: President Obama will win Pennsylvania, and Mitt Romney’s attempt to make a play for this state is more of a sign of desperation on his part than anything else. This is part of the old Republican playbook. They tried a last ditch attempt to expand the electoral base in 2008 when they were losing Ohio, Iowa, Florida and other traditional battleground states. Mitt Romney ignored Pennsylvania over the course of the last two years, and didn’t ask Pennsylvanians for their vote. A week of advertising won’t change that.”

“The Romney campaign’s new ad in Pennsylvania distorts the President’s record and reeks of desperation. Under President Obama’s leadership, employment in coal mining hit a 15 year high in 2011 while he’s making historic investments in clean coal research and development. But, as governor Mitt Romney said a coal-fired plant ‘kills people’ and touted his power plant regulations as the ‘toughest in the nation,'” she said.