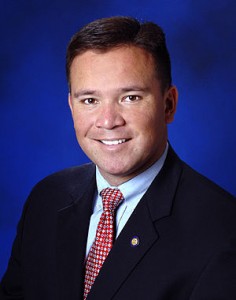 Update: Senate Dem Leader Jay Costa lobbied Lt. Gov. Jim Cawley today and requested that there be no special election for the seat. He said it would place an unnecessary burden on taxpayers.

“Holding an election a month or so before a regular election at a significant cost to the taxpayer is not ‘in the public interest,'” Costa said in a letter, adding that it would cost between $200,000 and $400,000. A regularly scheduled election – the general election – would be held within a few weeks at no extra cost.

In addition, paying a Senator for the time in office (the Senate has only eight session days before the General Election) would cost $25,000 to $50,000 per session day should there be a special.

“I remind you that the taxpayers already were forced to incur these excessive costs when the special election in the 40th Senate District was scheduled in August 2012, rather than on November 6, 2012, when the General Election is scheduled.”

Cawley has not yet made a decision, according to his spokesman.

John Pippy (R-Allegheny) is now, officially, a former Senator. He announced his retirement Saturday night, effective 14 minutes after Gov. Tom Corbett signed the state budget into law. Several sources indicate that Pippy will soon take the reins of the PA Coal Association, and his sudden departure threatens to complicate an already confusing campaign.

“The last nine years in the Senate have been the most meaningful experience I have had in my professional career,” he wrote in a letter to Lieutenant Governor Jim Cawley. “My Republican and Democrat colleagues in the Senate have become lifetime friends and I am humbled to have had the honor to work in this ornate Capitol and especially this chamber.”

Pippy, who has served in office since 1997 (as a state representative until 2003), had announced his intent to retire in January. Well regarded by colleagues on both sides of the aisle, the 41 year-old U.S. Army veteran is also considered a possible contender for office in the future – like the 18th district congressional seat. He was named by Governing Magazine called him a ‘legislator to watch’.

His Thai heritage also made him the first Asian-American to serve in the PA Senate.

“I would be remiss if I did not mention the hundreds, if not thousands, of outstanding relationships that I have been fortunate to forge with the residents of the 37th Senatorial District,” he added. “The support I received on a daily basis from my constituents has been both meaningful and lasting.”

President George Ellis said he couldn’t confirm or deny whether Pippy was joining the PA Coal Association, but did say the group would make a “big announcement” on July 9.

Pippy also would not confirm or deny plans to take a position with the PA Coal Association.

“I’ll be making an announcement concerning the next step in my career on July 9th,” Pippy told PoliticsPA, adding that his timing had nothing to do with the election. “I think the budget is one of the biggest responsibilities of a Senator, and I wanted to see that through first. Right now, I have a great opportunity in front of me.”

The race to replace Pippy has been one of the most interesting in the state. Businessman Raja defeated state Rep. Mark Mustio and activist Sue Means in a heated Republican primary. On the Democratic side, local activist Greg Parks won a write-in campaign, but dropped out Friday and is likely to soon be replaced on the ticket by state Rep. Matt Smith.

PoliticsPA is currently seeking to determine whether Cawley will call a special election ahead of the November election. The soonest such a special could take place is September 4, a mere two months before election day, and would cost the state hundreds of thousands of dollars. That Tuesday is the only one that falls in the eligible window 60 days after Pippy’s retirement and 60 days prior to the general election.

Such a move would undoubtedly benefit Raja, for whom time is not a factor; sources say is willing to invest his personal wealth in the race. The Democratic candidate would have less time to raise campaign cash in a special and would have a tough time bouncing back from a special election loss to a general election win.

“There will not be a special, to my understanding,” Pippy said.