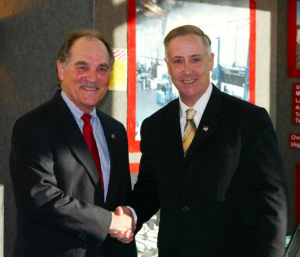 John Vernon knows he has a steep climb to the GOP nomination for U.S. Senate.

It’s his first go at elected office.  He’s from a rural part of the state with relatively few voters to pull from and he doesn’t have the deep pockets of some of his opponents.  But he suffers from no lack of energy.

His campaign this week launched his first phase of his Jobs and Economic Plan, his “100 Businesses in 100 Days” tour. It started at the Hamill Manufacturing plant in western Pennsylvania.  The tour is sure to generate lots of new photos for his campaign facebook page, currently the most active of any U.S. Senate candidate in Pennsylvania.

“John Vernon is showing a real commitment to bringing jobs to Pennsylvania with his 100 Businesses in 100 Days pledge,” Hamill Manufacturing Chairman and Chief Executive Officer Jeff Kelly (pictured left) said. “You will not see any other Senate candidate spend this kind of time finding solutions to the jobs and economic problem. He will make a great United States Senator,” CEO Kelly added.

During his tour, Vernon will visit companies and businesses of all sizes throughout the state to initiate conversations of employment growth and job creation.

“We have 14 million unemployed and millions more who have stopped looking for a job. It is very important that any jobs plan include solutions and concepts gained directly from job creators. Government doesn’t create jobs, but business does, which is why we need to listen to the people doing the hiring,” Vernon said.

“I will listen to many business leaders throughout the state, collate their greatest concerns, and take them to Washington. Business, not government, will lead our country out of this economic morass.”

Sources indicate that Vernon doing well among primary voters in the northern tier. State committee members in the region, where Vernon has traveled extensively since beginning his campaign this summer, have warmed to the Colonel.

Vernon, who raised about $117,000 in the third quarter, has a relatively large campaign team.

From the Vernon campaign:
Campaign Manager
Jean-Pierre “JP” Bolat, a graduate of the United States Naval Academy, a 20-year decorated Navy Commander (O-5), and International business consultant. “JP’s” last active duty assignment was under Colonel Vernon as his Chief of Combat Operations, Exercises, and Future Capabilities for Headquarters, U.S. Forces Japan, where he was architect of numerous military-political campaigns in the Asian-Pacific theater of operations. He was nominated three times by the Navy as an astronaut candidate, and earned a Master of Science in Astronautical Engineering from the Naval Postgraduate School in Monterey, California, and an Executive MBA from Temple University’s Fox School of Business, Philadelphia.

John Allen Peschong has over two decades of political experience, public affairs and media experience. John honed his skills in politics and media while working in the White House during the Reagan Administration and later as the Executive Director for the California Republican Party, a senior strategist for President George W. Bush and Senator John McCain, and as Western States Political Director for the Republican National Committee (RNC).

John Eddy has decades of political experience beginning over 25 years ago when he was the charter volunteer and lead spokesperson for Kids Voting USA.  This passion has stayed with him as he served as the National Victory Director at the Republican National Committee under President George W. Bush, and later worked at the National Republican Congressional Committee. John lectures here and abroad on strategic fiduciary allocation, grassroots marketing, political strategy, and media communications. In 2008, John served as a member of a national steering committee in the John McCain for President Campaign, and served at the U.S. Department of Justice in the Office of the Attorney General.

Robb Austin, a graduate of the George Washington University. He is a former newspaper reporter for the McKeesport Daily News, and a former Member of the Pennsylvania House of Representatives. He founded Austin Communications, Pittsburgh, in 1986, and has consulted on numerous U.S. Congressional and Senatorial campaigns. A political appointee of President Ronald Reagan, Robb also served for two different members of Congress as their chief of staff in Washington D.C.

Donald Hoffman had a distinguished career at ICAP, North America, where he was a Securities Broker for 28 years. He is currently a resident of Jackson Twp., Pennsylvania, and serves as the township auditor. From 2007-2009 Don served as executive director of Country Round-up for the Cure, a grass-roots organization that raised funds for the benefit of the Pennsylvania Breast Cancer Coalition.

Jan C. Anderson, Bachelor of Science, Accounting, 1987, Southern Connecticut State University, New Haven, CT; over 20 years of supporting major corporations in Health/Life Insurance sectors and Corporate Franchising. Prior to joining the campaign, Ms. Anderson was the Director of Finance for Edible Arrangements, Inc., one of the fastest growing franchises globally.

Led by Evan and Pam Barnet, Barnet Associates LLC, a SDVOB (Service Disabled, Veteran Owned Business) company that serves a base of clients in Pennsylvania, New York, Connecticut, New Jersey, and throughout the United States. Barnet Associates LLC is a process improvement and automation organization that aids companies in efficient use technology solutions. Through Internet and database technologies, clients are able to take advantage of real time reports and data analysis. Specialties include online shopping carts including the newest Facebook shopping and donation solution, dashboard management reports, and web systems.