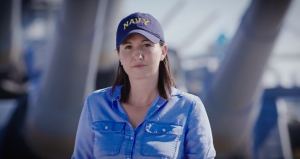 “Washington isn’t delivering for Bucks County families, and with so much at stake, I had to step up.  Congressman Brian Fitzpatrick has voted with Donald Trump 80% of the time, and has done nothing to lower healthcare costs or create jobs,” Reddick said in a release.

Reddick served as a Judge Advocate General in the Navy after graduating from from Rutgers Law School.  Prior to that, Reddick was legal advocate for victims of domestic abuse at the Bucks County Domestic Violence Agency.

Reddick is currently an officer in the Naval reserves.

Fitzpatrick’s campaign responded to the announcement, welcoming Reddick to Bucks county and to the race.

“We welcome her to Pennsylvania and wish her well in her new residence.  As Brian is less than nine months into his first term in office, he will remain focused on working closely with our hometown community to represent all of us in Washington, and will not be engaging in campaign discussions until the campaign season begins next year,” Fitzpatrick spokesman Mike Barley said.

You can view her announcement video below.