“No party is always right. But Elder Vogel voted with the Republican Party 98 percent of the time,” says an announcer.

“He voted for $900 million in cuts cuts to school funding, causing property taxes to rise. He’s pushing an extremist agenda, that puts politics before women’s health. And they’re hurting our community, by cutting programs for seniors.”

It’s the strongest of several recent ads from Democratic candidates for Pa. Senate. It’s airing on cable in the district plus a few broadcast spots.

Most Republicans contend that there haven’t been cuts to education. Rather, they say, the state has increased its share of education funding. The dropoff is a result of expiring federal stimulus funding.

Democratic critics note that the funding increase is going to pension obligations, not classrooms.

Update: Vogel Campaign Manager Joe Weidner echoed the above response to the education cuts attack and said the ad was desperate.

“Ms. Villella is in desperation mode right now. Since it’s become evident to her she cannot win this election by debating the facts she has resorted to telling flat out lies about Elder Vogel,” Weidner said. “As a state senator, Elder has proven time and again his commitment to public education and is the farthest thing from a ‘party puppet.’  Elder stood up to members of his own party and voted against the school voucher bill and has overwhelming support from teachers in his district, including the endorsement of the Pennsylvania State Education Association.”

Vogel won the Democratic-leaning district in 2008. It’s one of the top state Senate races in Pa. this cycle. His first ad of the cycle is an all-positive bio spot.

“As a fourth generation dairy farmer, who still works the farm on early mornings, Elder Vogel has learned our values working the land,” says the announcer. “As our Senator, Elder Vogel has fought for jobs for us, such as encouraging Shell to come to Beaver County.”

“Senator Vogel can spin his record all that he likes, but the fact remains that his voting record reflects that he does not understand the values of our region at all,” Henry said. “The agenda supported by him, Gov Corbett, and Republican leadership is wrong for Pennsylvania.” 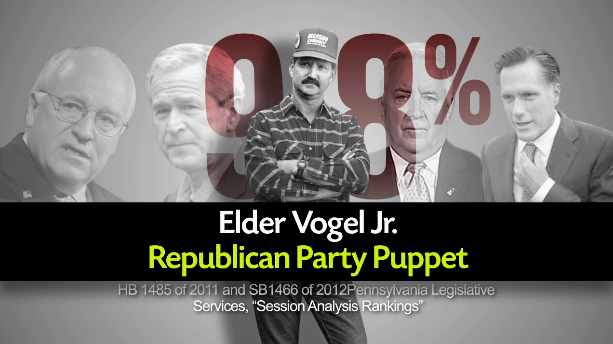