Voter ID Goes Back to Court 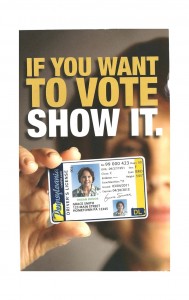 Commonwealth Court Judge Bernard McGinley presided. In opening arguments the attorney representing the opponents of the voter ID law said that he was challenging the law in every aspect, not only its implementation but its constitutionality.

The law requires voters to show identification in the form of a valid drivers license, Department of State ID card, veterans ID card, or military ID card when voting.

The requirement was passed by the legislature in March of 2012, but a judge placed the law on hold for the 2012 general election and for the 2013 primary. Judge Robert Simpson cited implementation problems in his decision.

“This case is about a law that on its face makes it harder to get ID. The law imposes a new regulation on voting,” said Michael Rubin, the opponents’ attorney.

Opponents attempted to lay out that the voter ID law, which was passed by the General Assembly on March 14th, 2012 as Act 18, was unduly burdensome to some of PA’s citizens.

“Citizen’s now have to go to one of PennDOT’s 71 locations, that do not exist in nine counties,” Rubin continued.

Rubin also revealed in his opening statements that the plaintiffs will be exhibiting a memo dated November of 2011 from the Department of State and the Department of Aging to the Governor’s office. He said the letter states that those who cannot get to a PennDOT location, will in its words be, “disenfranchised”.

Ruben stated that he felt those who were disenfranchised were likely between 300,000 to 400,000 people but that even PennDOT’s own analysis came up with 900,000.

Representing the state, Assistant Attorney General Tim Keating argued that requiring voters to present ID is not new and that, “it is not unduly burdensome to require it.”

Keating argued that if the citizens wanted to vote it was not too difficult to go a PennDOT licensing facility once every ten years to do so.

“There are 8 million registered voters and only 6 million voted in the last election. PennDOT has issued 9 million licenses and ID’s.”

He also stated that despite no recorded evidence of voter impersonation being documented in Pa., the law still has merit by preventing possible future fraud.

Testimony was given from two women, Marion Baker of Reading and Mina Kanter-Pripstien of Philadelphia on their experience with the Voter ID law. Both did not vote in the May 2013 primary. Opponents of voter ID tried to show in the testimony how the law prevented both women from voting while supporters of the law attempted to show that the women made a decision to not to vote voluntarily.

The trial will continue throughout the week examining the merits of the law. Judge McGinley must ultimately decide whether the current injunction will stand.

The ultimate decision, whether the law is constitutional, likely will be appealed to the Pa. Supreme Court by the losing party.