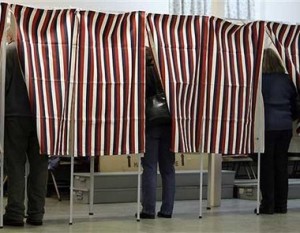 The second and final round of challenges to Pennsylvania’s Voter ID law will be made this week.

After Commonwealth Court Judge Robert Simpson declined last month to grant an injunction that would have blocked the law from being implemented, its proponents have been celebrating while its opponents have been preparing for the looming legal battle in the state’s highest court – which is currently split along partisan lines: three Democrats, three Republicans.

Here’s what’s been happening across the state:

The Post-Gazette’s Tim McNulty wrote today for Early Returns that one of the examples Judge Simpson used to uphold the law was Patterson v. Barlow, an 1869 case that dealt with voter registration rules in Philadelphia that were different from those in other parts of the state.

Simpson cited the case repeatedly to show that the legislature is permitted to make laws regarding registration rules.

“Sounds good,” wrote McNulty, “Except — as Pitt law prof Jessie Allen writes in an op-ed in today’s PG — there’s a lot more to Patterson, and the Supreme Court decision upholding it back then, which should give pause to the six Supreme Court justices meeting Thursday on the latest voter bill.”

The law approved in Patterson enacted a complicated set of registration procedures for Philadelphia (with its large working-class and immigrant populations) and a simpler procedure for the rest of the state. Equally outrageous, the law required any would-be voter who gave a hotel or boarding house as his address to go through an arduous verification process, including getting two “private householders” to swear that he was qualified to vote. That process effectively disenfranchised the workmen who filled the city boarding houses at the end of the 19th century.
Amazingly, in Patterson the Supreme Court went out of its way to clarify — and endorse — the law’s biased approach. The opinion justifies a tougher process for Philadelphia voters because “rogues and strumpets do not nightly traverse the deserted highways of the farmer. Low inns, restaurants, sailors’ boarding-houses and houses of ill fame do not abound in rural precincts, ready to pour out on election day their pestilent hordes.”

For good measure, the court explained that to overturn the tighter procedures for Philadelphia voters “would be to place the vicious vagrant, the wandering Arabs, the Tartar hordes of our large cities, on a level with the virtuous and good man.”

. . . Wrenched out of context, the legal language that the Commonwealth Court judge chose to quote from Patterson sounds like a fair basis for upholding the new voter ID law. But, in fact, the old Patterson case represents the Pennsylvania Supreme Court’s shameful failure to protect elections from a law designed to make voting harder for some people than for others.

The NAACP, CWA and TWU hit the pavement

The NAACP and two national unions – Communications Workers of America (CWA) and Transport Workers Union (TWU) – are working together in an effort to register 25,000 new voters in the state by Oct. 1.

The three groups, two of which typically work on behalf of and endorse Democratic candidates, announced the collaborative effort Friday and said they would be mainly targeting the state’s two largest cities, Philadelphia and Pittsburgh, and that the drive is as much about educating voters as it is registering them.

A press release sent out on behalf of the groups said the law was “cynically designed to suppress turnout” – especially minority groups – and that they plan to give people the information they need to participate in the democratic process.

“The NAACP and Organized Labor have made a commitment to ensure all civil rights are granted to all people, and here in Pennsylvania the right to vote is being threatened by a conservative, extreme group of people,” said Northeast Regional Director Marvin Bing.

“We will not sit by and we will fight back and we will register as many voters over the course of the next month.”

The groups emphasized that the concerted effort shows their dedication to working together and forming a strong coalition to help their members and the community.

“Together, we will work day and night in Philadelphia and Pittsburgh to register new voters and educate current voters about what they now need to do to participate in the democratic process,” said CWA District 2-13 Vice President Ed Mooney.

“Some in the State Legislature may think they can keep eligible voters away from the polls with unnecessary hurdles, but they need to think again.”

PA GOP spokesperson Valerie Caras said, “Commonsense Voter ID legislation is about ensuring everyone has the ability to have their vote counted fairly. I would suggest that everyone benefits from a fairer election.”

Philadelphia Mayor Michael Nutter is attending an 11:30 a.m. meeting with the 170-member PA Voter Coalition, talking about a partnership between the group and Phila city government to educate voters of the law – and motivate those without proper ID to get it.

The Committee of Seventy is the convener of the nonpartisan PA Voter ID Coalition. The group is made up of 170 state, regional and local organizations whose goal is to inform voters. Their campaign is focused on the law and helping people get ID in order to vote.

Complications for the absentee ballot voter

Absentee ballot fraud is more common that in-person voter fraud – which is the only type of fraud Voter ID was designed to address. But the law also made changes to the way absentee-ballot voters get their vote counted.

Phillyburbs’ James McGinnis wrote that the law is complicating the process for hundreds of Bucks County voters.

He said that the county Board of Elections has already received 1,600 applications for absentee ballots – and of those potential voters, 12 percent lack proper ID information.

The new forms ask voters to provide their driver’s license number, PennDOT ID number or the last four digits of their Social Security Number – and more than 200 of the applications submitted were using older forms that do not have these requirements.

Deena Dean, elections director for Bucks County, told McGinnis that there are a lot of old absentee ballot applications across the county.

“Older applications were at libraries, and post offices and state liquor stores, township and borough halls,” she said, adding that while officials have been working to remove them, committee people and campaigns may also have old applications.

McGinnis said letters will be sent to those people who submitted an old or incomplete form. Their votes will not be counted unless they include the requested Voter ID information.

Bucks County is said to have received 20,427 absentee ballots for the last presidential election in 2008, and county officials said they expect to receive the same number – if not more – this time around.

According to a national study by George Mason University, the number of absentee ballots submitted across the state for the 2008 election numbered around 235,000, or roughly 4 percent of the vote.

That’s all for now, folks. Stay tuned as the law heads to court this week!