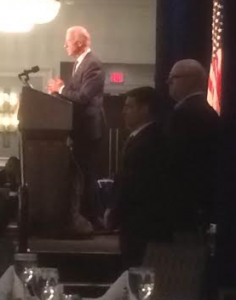 Vice President Joe Biden was the keynote speaker at the House Democratic Caucus Friday, held at the Sheraton in Olde City, where he spoke mainly about the economic upswing the country has had since President Obama took office.

The VP began by explaining the difficult decisions he and his party have had to make over the past six years.

Admitting that many stances the Democratic Party has taken over the past several years have been “unpopular,” Biden said that many decisions made by the party have “come at a real political cost.” He added that many Congressional Democrats lost their seats because “they had the nerve to stand up and do what they thought was right.”

Biden then went on the offensive by criticizing Republicans, including Mitch McConnell, who said that the economic recovery might have been a result of the anticipation of a GOP Congress.

“Is there anything more farcical than Mitch (McConnell) and John Boehner taking credit for the economy? It’s amazing,” Biden said.

In the speech, Biden made a point to note that the country was losing 800,000 jobs a month when Pres. Obama was sworn in as a result of “bankrupt economic policies of the Republican Party.” He also rejected the theory that “government is always the problem,” and that the country’s job creators are the rich: “The people who are out there who are the job creators are the ones who took the product and made it, sold it, purchased it.”

The Vice President spoke a lot about the economic success of the country, but also spoke about the Democratic Party’s inability to communicate the success to the American people.

“We have to remind the American people that things were bad before we took office and now they’re better and (to) give us credit — they’re already doing that — (but) that’s not sufficient,” he said. “And what we all did together, we have to lay out why it’s changed (and) why we created 11 million new jobs so that they have confidence when we say, ‘this is what we want to do now.’”

Continuing on the economic success Democrats have had in their middle-class-first economic approach, Biden noted the triumph of the Recovery Act passed in 2009. He said that many Republicans “including some Democrats” viewed the bill as “undisciplined wasteful Washington spending,” but that the bill “has now been recognized virtually unanimously by economists on both sides of the aisle that it prevented us from sliding into a depression,” leading to one of the biggest applauses of the morning.

Biden urged the House Democrats to keep supporting middle-class economics and seize the credit for all the accomplishments they’ve had over the past six years.

“Lay out the case,” the VP urged. “This (economic outlook) can benefit hundreds of thousands — millions — of middle class people, not by giving them a handout, but by giving them an opportunity to meet their expectations.”