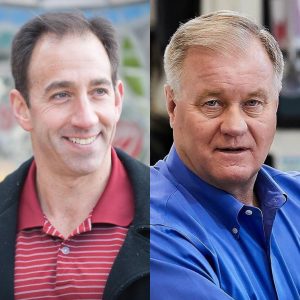 An endorsement from his old running mate.

According to a press release from the Bartos campaign, the two campaigned together in southwest Pennsylvania on Thursday.

Wagner lauded Bartos, a Montgomery County real estate developer who was the GOP Lt. Governor nominee in 2018, as the best man for the job and expressed confidence in his candidacy.

“Jeff is the best man for the job, he is the real deal. I know Jeff will win this seat, and he’ll be one hell of a Senator,” Wagner said to local press, according to the Bartos campaign.

“Barnstorming Southwest PA today with my good friend Scott Wagner. I loved campaigning with Scott in 2018, and I’m honored to have his support in my race for US Senate,” Bartos tweeted on Thursday afternoon.

Barnstorming Southwest PA today with my good friend Scott Wagner. I loved campaigning with Scott in 2018, and I’m honored to have his support in my race for US Senate.

We’re on our way to the Bedford fair now, hope to see you there! pic.twitter.com/dwwTFRWT43

Bartos also completed his twelve day, 67 county tour of Pennsylvania over the weekend. Bartos is the “first statewide candidate of either party to visit each of Pennsylvania’s 67 counties this cycle, to our knowledge,” according to his campaign.

Bartos is currently one of several candidates seeking the GOP nomination for U.S. Senate in 2022.

Kathy Barnette, a veteran and conservative commentator who was the GOP nominee for Pennsylvania’s 4th Congressional District in 2020; Sean Gale, an attorney; Sean Parnell, a combat veteran and author who was the GOP nominee for the 17th Congressional District in 2020; Carla Sands, former U.S. Ambassador to Denmark; Craig Snyder, a political consultant and former chief of staff to Sen. Arlen Specter; Everett Stern, a businessman and HSBC whistleblower, have all formally declared their intentions for the GOP nomination in the race to succeed outgoing GOP Sen. Pat Toomey.