Firing back at his opponent, Jack Wagner launched his third ad of the Pittsburgh mayoral primary. It rebuts an earlier ad aired by opponent Bill Peduto and throws a jab back at him.

Peduto’s second ad cast Wagner as an ally of Republicans in Harrisburg. 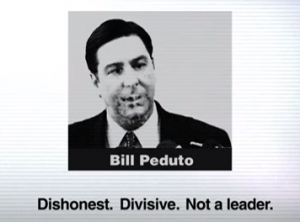 It goes on to slam Peduto directly.

The spot was produced by Philadelphia-based Bronstein & Weaver. It shows that even as weeks-old polls gave Wagner the lead, his campaign isn’t acting like an invulnerable frontrunner.

“In his latest ad, Jack Wagner seeks to avoid the important issues in this race by running away from his own voting record and experience. Wagner has not disputed the facts raised in Bill Peduto’s latest comparative commercial,” she said.

Peduto’s that Wagner supported budget cuts by Harrisburg Republicans is false. While Wagner did support some of the principles that guided the GOP’s 2011 budget, he opposed several of the cuts they proposed.

He said Democrats in the legislature were wrong to try to spend a “surplus” on stop-gap spending items. Additionally, he said that the state should expect more savings from welfare programs.

However, unlike Peduto’s ad implies, Wagner did not advocate for cuts to social programs. In fact, a Pa. Public Radio report from the same day makes it clear that Wagner opposed the sweeping cuts proposed by the House GOP.

Peduto would have been on safer ground if he had said Wagner had helped Republicans. He publicly contradicted Democratic party talking points about the state budget in 2011 and gave political cover to the GOP. But as the ad is phrased, it is false.

The Peduto ad suggestion that Wagner wanted to cut health care for more than 100,000 people is false.

In 2011, Wagner said he supported a policy of robust audits for the Pa. Department of Public Welfare. The article cited by Peduto’s campaign makes clear that the 113,000 people thus removed from state medical assistance were, “people who died, moved out of Pennsylvania or were found ineligible for benefits”.

Wagner gave himself a pay raise?

Peduto’s ad is true, and certainly fair game for a campaign. Wagner voted for and accepted pay raises.

As a state Senator in 1995, Wagner voted to enact automatic pay raises of legislators like himself. In 2001 he voted for a bill that increased lawmaker pensions by 50% – just as Peduto’s ad claims.

After leaving the state Senate and becoming Auditor General, Wagner went on to criticize the automatic, cost-of-living raises, as his latest ad highlights. Additionally, he returned some of his raises during his second term as Auditor.

In its ad, the Peduto campaign cited a Pittsburgh Tribune-Review article. The Wagner ad cites the Pittsburgh Post-Gazette. Both articles are from the same day, about the same Wagner press conference. But only the Trib report makes note of the fact that Wagner himself voted to enact automatic pay raises for lawmakers.

Wagner’s ad says Peduto is divisive. Their source is subjective, but the ad accurately cites a Pittsburgh Post-Gazette report and demonstrates the value of a carefully-worded attack.

City Council President Darlene Harris herself briefly ran for Mayor, but dropped out and endorsed Wagner earlier this month.

She and Peduto have a history of acrimony and one could argue that her estimation of Peduto is imperfect. However, she did say those words, as Wagner’s ad reflects.