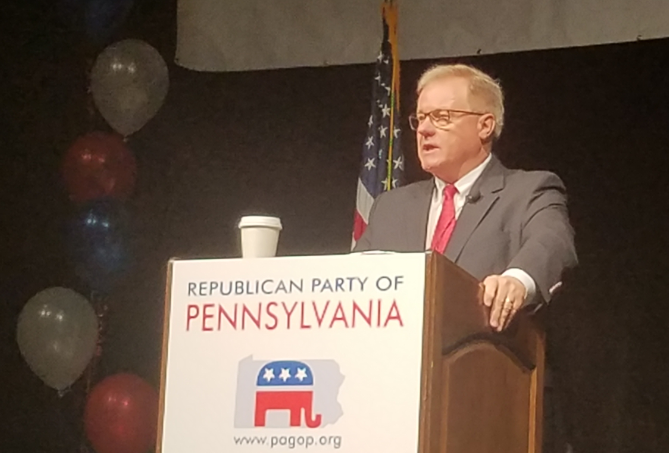 But the mood in the room could scarcely have felt less like a victory lap.

“Patriots from Forest County to Philadelphia worked hard to make sure Pennsylvania was bright red on November 8th,” Wagner said.

Despite a strong November, including wins for president, U.S. Senate, and historic margins in the state House, state Senate and congressional delegation, the mood at the Hershey Lodge is tense.

All of the approximately 300 dinner attendees were focused on one thing: the deeply divisive race for PAGOP Chair. The contest that turned heated and personal in recent weeks and committee members have been heavily lobbied going into Saturday’s vote.

“This is my last speech at one of these.  Next time you are going to have to listen to Val or Lawrence,” he joked to applause and laughter.

Val DiGiorgio is chairman of the Chester County Republican Committee. Lawrence Tabas is General Counsel to the PAGOP. Straw poll results show DiGiorgio with an edge, 120-to-100.

“That’s right folks, Tom Wolf is a failure, the question the people in this room have to answer is who will replace him,” Wagner said. “We need someone who represents everything that Tom Wolf isn’t.”

“You’ll find I am the only candidate who has the resume to take on Tom Wolf and win,” Wagner said.

Wagner he picked up at least one endorsement: Gleason.

“As a citizen and a former chair I am on board with Scott Wagner,” Gleason said. He added, “I wouldn’t be surprised if [President] Trump campaigned for Scott Wagner in Pennsylvania.”

But Friday’s speaking platform also carried a risk: getting caught in between two intraparty factions. Wagner left shortly after his speech.

“Scott Wagner is the worst kind of Harrisburg insider who caters to special interests at the expense of hardworking Pennsylvania families,” said party spokesman Preston Maddock. “Governor Wolf has taken a different approach for Harrisburg focusing on what matters to the people of Pennsylvania by protecting education, strengthening programs for seniors, and expanding treatment for people with addiction.”