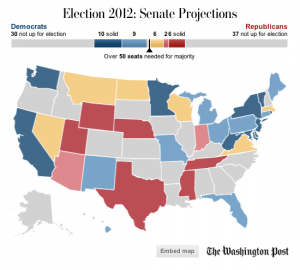 It’s a good day for Tom Smith. The self-funding farmer-turned-coal company owner is steadily making headway against Senator Bob Casey. The race has begun to tighten down the stretch, prompting The Washington Post to downgrade the race from “solid Democrat” to “lean Democrat” on its 2012 Senate map.

Pennsylvania is in good company, joining the ranks of Ohio, Florida, Missouri, New Mexico, Maine, and Michigan as state’s with competitive Senate races.

“The shift reflects movement toward the Republican side and suggests the race is firmly in play,” says The Washington Post, before quickly reaffirming that, “Casey is still the clear frontrunner here.”

The news from The Washington Post comes in response to two polls released today by Quinnipiac University and Franklin & Marshall University. The first poll shows Casey’s lead at 49 percent to 43 percent, 12 points closer that the group’s August poll, while the F&M poll has Casey up 48 percent to 38 percent over Smith among likely voters.

Smith’s rise in popularity may be attributed to his spending this campaign season as the Senate seat hopeful continues to outspend Casey at a rate which is estimated at 3 to 1.

Until recently, no national groups had engaged in the Pa. Senate race. However, a Republican super PAC affiliated with FreedomWorks entered the ring by donating $200K towards live calls to Pa. citizens in order to conduct research on voters. This move may attract other national groups if the race remains closer down the stretch.

Casey’s campaign manager Larry Smar spoke to the The Washington Post, reiterating the lopsided spending battle since the end of the primary.

As Casey attempts to fend off Smith, the TV ads placed by the two have gotten personal. Casey has tried to pin “Tea Party Tom Smith” as a conservative who is outside the realm of majority Republicans, while Smith has made efforts to make Casey look like a money spending liberal in ads bombarding the Philadelphia area.

The two will continue to fight each other for Pennsylvania’s votes until the November elections. Until then, the brawl should be fun to watch.