Welch Video: Smith Not Articulate Enough to Take on Casey

Steve Welch’s latest web video asks, “Can we afford Tom Smith as our nominee?” and showcases some unflattering clips of Smith speaking at debates and forums.

“I will get more polished,” says Smith in a brief clip, followed by a caption saying: “We can’t wait for Tom to get better.”

It goes on to spotlight various Smith verbal foibles, along with Welch’s jabs at the former coal company owner for raising taxes as a local official and voting in the 2010 Democratic primary.

Welch’s strength – and a big part of the reason he won the endorsement of the Philadelphia Inquirer and Pittsburgh Post-Gazette – is his ability to articulate complex concepts and explain them in an accessible way. Welch an entrepreneur from Chester County.

His campaign and Smith’s have exchanged shots and negative TV ads for several weeks.

Smith, on the other hand, is a former coal company owner and farmer. Though strong in small, personal appearances, his performance in debates has been hit or miss so far in this race.

Welch argues that the GOP needs to nominate a candidate who can stand toe-to-toe with Casey on a debate stage.

Smith’s campaign called the video out of line and several of the clips out of context.

“That Steve Welch would selectively and dishonestly edit hundreds of hours of video from countless debates and public meetings into mere seconds of out of context footage, is a further testament to his desperation,” said campaign manager Jim Conroy. “But even his misleading attacks and personal slanders will not allow voters to forget his strong support for liberal candidates like Barack Obama and Joe Sestak.”

In one case, the video features Smith saying, “And we will hang him,” about Casey. The quote comes from a forum where Smith was asked about how to defeat the freshman Senator.

“And we will hang him, by his record,” is  is likely what he meant – not quite as scandalous.

“And we will hang him… I shouldn’t say that. We will put forth that very forcefully and aggressively.” 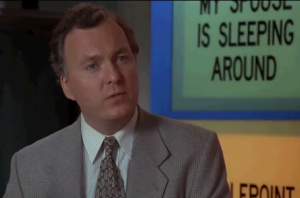 The highlight of the video, appearing after a number of Smith clips, is its inclusion of the second-best scene in modern film: the principal’s speech during the academic decathlon in the film ‘Billy Madison’:

“What you’ve just said is one of the most insanely idiotic things I have ever heard. At no point in your rambling, incoherent response were you even close to anything that could be considered a rational thought. Everyone in this room is now dumber for having listened to it. I award you no points, and may God have mercy on your soul.”

And here is the best scene in modern film: