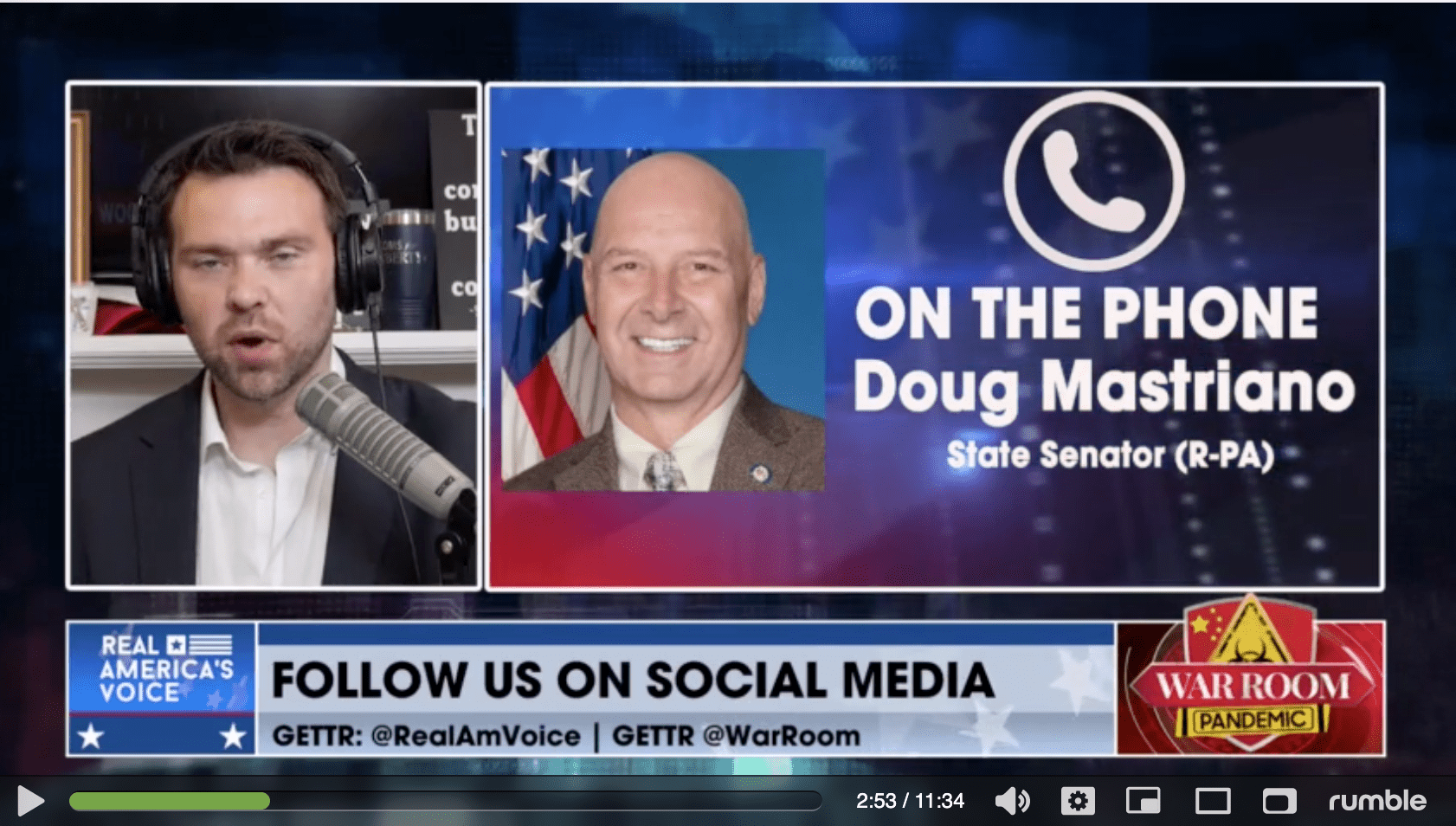 One of the challenges for media covering the Republican candidate for the Pennsylvania governor’s mansion is his unwillingness to speak to traditional media.

Doug Mastriano has been willing to speak on the record to more friendly, right-wing outlets, such as Bannon’s War Room on social media platform, GETTR.

The state senator from Franklin County did just that on Wednesday in an 11-minute interview and had a few things to say about Democrats, POLITICO, the Philadelphia Inquirer, Josh Shapiro, and MSNBC host Nicolle Wallace. Here are some highlights.

The interview began with a 40-second clip from “Deadline: White House” with a voiceover from host Nicolle Wallace.

“Just to correct the record,” said Mastriano, “nobody that I know of, including myself, denies the election happened. These buzz phrases that young lady … I’m sure she’s not a journalist … did not go to school for that. Probably majored in gender studies.

We didn’t deny there was an election. There is no election denying. But we do have questions. There’s a big difference.”

Wallace, a former White House Communications Director under President George W. Bush and a campaign aide for John McCain during his 2008 presidential run, graduated from the University of California with a B.A. in mass communications. She obtained her master’s from Northwestern in, yes, journalism.

Did You Win With The Help of the Democrats?

“Hell no. I worked my ass off across the state with my wife, Rebby. We touched about 30,000 hands … talked to many, many thousand more people. We had this election won actually last year. When polling began last May, I was always ahead and my lead would continuously grow. The idea that a few Democrat ads had anything to help me win the election, that’s complete RINO Democrat nonsense.”

Democrats May Have Gotten More Than They Bargained For.

“We’re gonna smoke Josh Shapiro like a bad cigar. I had a tough primary. I smoked it. I won 55 of 67 counties. The entire western and middle part of state was red. I got all the southeast except the home county of a candidate.

That was a win that we did on our own. The Democrats get no credit for that. The idea that they want to insert themselves as some kind of kingmaker here is ridiculous. They’re very poor choosing.”

What Can Be Done About Voter Integrity Between Now and November?

“We made minor steps though. Is it enough? I think so. “Zuck Bucks” are out and that was the thing Democrats used in 2020 to get out the vote. It wasn’t about voting integrity for them and setting up those boxes outside. We’re going to have to have eyeballs in all the election stations. I need 20,000 poll watchers to cover the state.”

What Trends Are You Seeing in PA? What About Voter Registration Flipping?

“We flipped people in February during the petition drive. People are so disgusted because the media all have their cute little talking point from little Josh Shapiro. He’s a train wreck. He likes to say ‘I’m the senior law enforcement official in the state.” How’s crime under Josh? He gets an “F.” He’s failed us.

People are leaving his party left and right. I’m seeing huge trends with the Latino population which is following solidly with me. Independents break almost 60 percent for Doug Mastriano.

I’m all about freedom. I’m pretty mainstream, pretty level-headed and actually fairly moderate overall. My goal is to re-open the state and turn the power back to the people where it belongs.”

What Weaknesses Do You See in Josh Shapiro?

“I’m going to deflect here to his pom-pom girls in the Philadelphia Inquirer. Because they just adore him. Those reporters make crap up to protect him. Oh crap, Josh has never been vetted. He’s never had a hard challenger in any race. Well, he’s meeting his demise right now in the form of Doug Mastriano.

Retired Army colonel, served my country all my life, not a rich kid like he is. I like to be underestimated as I was in the primary. Many actively serving leading Democrats, elected officials, not former, who grab me and say ‘you’re better for Pennsylvania and my community than Josh Shapiro will ever be’ and ‘I’m working and fighting behind the scenes to win’ … you to be our Governor.”