What Does An Election Worker Do? 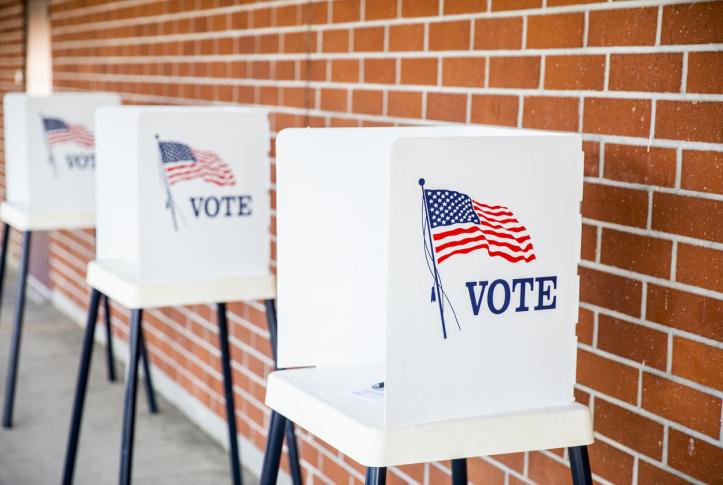 Earlier today, Heidi Przybyla of POLITICO wrote a story on a “plot” by Republican Party operatives to install trained recruits as regular poll workers” prepared to challenge voters at Democratic-majority polling places, developing a website to connect those workers to local lawyers and establishing a network of party-friendly district attorneys who could intervene to block vote counts at certain precincts.”

As a former director of elections for a Pennsylvania county, it is important for you – the discerning reader – to understand just what is at play. What does an election worker do?

The Judge of Elections is the person in charge of the polling place. The majority and minority inspectors work together with the judge to manage the polling place, keep track of the number of voters, and make sure that the returns are delivered to the county election office at the end of the day.

Machine inspectors and clerks are supervised by the judge of elections and help check-in voters, manage the lines, and make sure voters know where to go at each step in the voting process. Unlike the elected positions, these positions are always filled by appointment.

To be a poll worker, you must be registered to vote in the county where you wish to work. Additionally, government officials and government employees are not allowed to serve as poll workers with some exceptions. And you may not serve as a poll worker if your name appears on the ballot.

Poll workers also sign an Election Officers’ Oath that they will conduct the election properly and lawfully, while assisting voters in a courteous manner. They are trained NOT to discuss their opinions with other poll workers or voters concerning candidates, political parties or ballot issues. They are not permitted to wear partisan clothing, stickers, buttons, etc. inside the polling place. The expectation is that poll workers are nonpartisan.

It is a long day, as poll workers generally work for the entire day which begins around 6 AM and continues well after the polls close at 8 PM. County boards of elections train their poll workers on the election day duties in the month preceding the primary or general election.

In the county where I served as Director, we had over 1,000 poll workers serving over 150 precincts. These people are the true champions of democracy.

Let me repeat that … these people are the true champions of democracy.

Poll workers differ from poll watchers. And it is an important difference.

Poll watchers are appointed by candidates or political parties to “watch” the election proceedings on Election Day in the interest of the party of candidates they represent. They are not permitted to interfere with election workers, nor are they permitted to approach voters inside the polling place. Typically, watchers must stay within a defined boundary established by the judge of elections.

Watchers must provide a certificate from a county Board of Elections indicating their name, name of the candidate, party or political body they represent.

What are watchers permitted to do?

What are they not permitted to do? 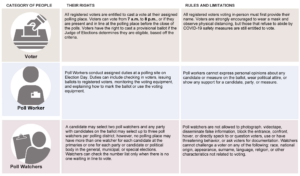 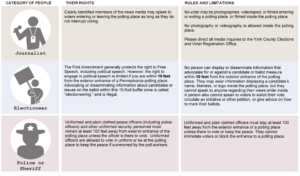 The Michigan plan, as outlined by a Republican National Committee staffer in the state, includes utilizing rules designed to provide political balance among poll workers to install party-trained volunteers prepared to challenge voters at Democratic-majority polling places, developing a website to connect those workers to local lawyers and establishing a network of party-friendly district attorneys who could intervene to block vote counts at certain precincts.

In Pennsylvania, any election officer, qualified elector, overseer, or poll watcher has the right to challenge a voter for the following reasons:

And even then, the challenge does not prevent the individual from voting, but specific steps must be taken before they are permitted to vote.

“Being a poll worker, you just have so many more rights and things you can do to stop something than [as] a poll challenger,” said Matthew Seifried, the RNC’s election integrity director for Michigan, stressing the importance of obtaining official designations as poll workers in a meeting with GOP activists in Wayne County last Nov. 6. It is one of a series of recordings of GOP meetings between summer of 2021 and May of this year obtained by POLITICO.

“This is completely unprecedented in the history of American elections that a political party would be working at this granular level to put a network together,” said Nick Penniman, founder and CEO of Issue One, an election watchdog group.

“You shouldn’t have poll workers who are reporting to political organizations what they see,” Rick Hasen, a law and political science professor at the University of California, Irvine School of Law said. “It creates the potential for mucking things up at polling places and potentially leading to delays or disenfranchisement of voters,” especially “if [the poll workers] come in with the attitude that something is crooked with how elections are run.”