Where PA Congressional Candidates Stand on Pelosi and Trump 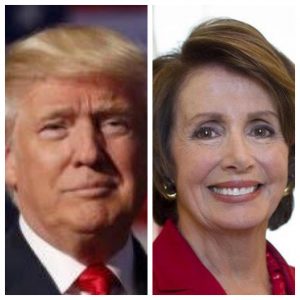 If you’re following congressional races in Pennsylvania and across the country, you probably see the same two names pop up consistently: Nancy Pelosi and Donald Trump.

Both figures are in negative territory among independent voters and strongly unpopular with the opposing party’s base.

Republicans have consistently criticized the former Democratic Speaker of the House, who has stated her intentions of resuming that role should the Democrats regain the majority. It is common practice to see Republicans tie their Democratic opponents to Nancy Pelosi.

Most Democratic candidates hope to tie their GOP counterparts to the President, especially in swing districts. Trump has already launched his re-election campaign.

Only time will tell if Pelosi will be Speaker or President Trump gets a second term. But in anticipation of general election maneuvering, PoliticsPA asked each congressional candidate two simple questions:

Some candidates have distanced themselves from Pelosi. Some from Trump. Some want to be aligned with neither.

Let’s take a look at the responses given in order of outright opposition to Pelosi as Speaker and Trump for President in 2020. 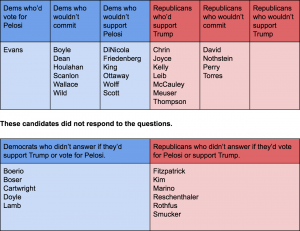 Democrats who would vote for Pelosi

1. I’ve been public in my support of Nancy Pelosi, but really that isn’t an issue the voters are coming to me about day in and day out.  It’s about protecting their access to health care, how they can find good paying and family sustaining jobs, someone to carry the water on real criminal justice reform and how can government function when every other day there is some new story of corruption. Those and many other issues are what the voters of my congressional district are truly concerned with.

1. I cannot answer that question until I know who is running for Speaker of the House.

1. The most important thing is for all Democrats to be focused on winning the 23 seats needed to win back the House and to not get distracted from focusing on this crucial goal. There is no point in discussing who the Democratic speaker might be if Democrats are not in the majority.

2. No. Donald Trump is the worst president of my lifetime. Under no circumstances would I support his re-election.

1. Nancy Pelosi has not asked me for her vote. Right now, I am focused on connecting with voters, winning this fall, and serving the people of Pennsylvania’s 4th district. Nevertheless, I am happy to say that Congresswoman Pelosi has been a powerful leader for the Democratic party–and I look forward to learning from and serving with her.

2. Additionally, I want to point out the false equivalency between supporting a proven public servant like Leader Pelosi and someone like President Trump. This displays full-well the crucial differences between the two parties. I am proud to be a Democrat and am putting in the work now so that we win back the House and are in a position to elect a Speaker who will hold Donald Trump and his enablers in Congress accountable.

1. It’s going to depend on who all the candidates are and what the circumstances are at that time. I do think, as a whole, the Democrats need to cultivate the next generation and I think they would be best served by leveraging Nancy Pelosi’s skills to help bring along the next generation. I’m just not sure what that’s going to look like in a year and a half.

1. I’m going to make my decision about whom to support for Speaker when I know who is running and what their values and platform are.

2. Similarly, when it comes to voting for President, I look for candidates who stand up for American values and leadership, and who I believe will best protect our healthcare, retirement security, and our working and military families. That pretty much rules out voting for Donald Trump.

1: Should she be elected, Susan will make her decision based on which candidate is the most likely to help the working families of the 7th district of PA.

Democrats who wouldn’t vote for Pelosi

2. I’m focused on this November’s election. The presidential election is more than two years away and we have no idea who will be on the ballot.

1. No, it is time for a new generation of leadership.

1. No. Folks in South Central PA are tired of a political establishment that rewards corporate donors and closes it doors to the public. We need new leadership in Congress – leaders who represent the voters, and no one else.

2. Donald Trump promised to drain the swamp and stand up for the American worker. Then he filled his administration with Goldman Sachs executives and big oil CEOs, supported a massive tax giveaway to the biggest corporations, and recklessly damaged our relationships with our allies overseas. I cannot support his re-election campaign.

1. No, I won’t support Nancy Pelosi for Speaker. I’ve said from day one of my campaign that the Democratic Party needs new leadership, because as it stands, they’re totally out of touch with voters in places like PA-12. The status quo is not working for us, and people want change, not more of the same. Our district is mostly rural, and the hard-working people who live here are too often struggling to make ends meet. I can’t count on a California millionaire to understand the challenges we’re facing. Two people I’d rather vote for if either runs for speaker: Cheri Bustos (Illinois) and Tim Ryan (Ohio), both of whom represent rural Midwestern districts and have proven track records of working across the aisle to get things done.

2. If and when the Democrats retake Congress, our goal can’t just be to obstruct or resist. Our goal has to be putting legislation on the President’s desk that he’s willing to sign. During his 2016 campaign, I agreed with Donald Trump on a number of kitchen-table issues: getting every American the health insurance they need, putting people to work building up our infrastructure, and taking real steps to care for our veterans. I’m optimistic that we can find common ground, get things done, and improve the lives of the people we represent. If a Democratic Congress puts Medicare-for-All on President Trump’s desk and he signs it into law, I’ll support him, because that’s a win for the people – regardless of party.

1. It is time for new leadership for House Democrats; I do not plan to vote for Nancy Pelosi for Speaker of the House.

1. No Ron DiNicola would not vote for Pelosi for speaker under any circumstances.

Republicans who would vote for Trump

1. I strongly believe in bipartisanship. Nancy Pelosi does not. Nancy Pelosi called the bonuses and minimum wage increases that millions of Americans received last December Crumbs. She is out of touch with reality and has no interest in working across the aisle. For that reason, I would not vote for her.

2. Yes, I would. President Trump is has worked hard to reduce government regulations and to improve relations with our most trusted partner in the Middle East (Israel). In addition, unemployment levels are at all time lows while consumer confidence and small businesses sentiment are at all time highs.

1. No, Nancy Pelosi is the poster child for term limits!  Her excessive spending while in Congress has bankrupted us with high interest student loans and large government spending. My opponent has received thousands of dollars as donation from Nancy Pelosi. Houlahan is Pelosi’s favorite hand-picked candidate.

2. I support President Trump, his re-election, and his economic vision for our country. The American economy is booming under this President’s leadership. The United States and the world are safer. Hardworking Pennsylvanian workers and small business owners alike are benefiting. I will continue to advocate and support policies that encourage economic growth and more jobs being created in Northeast Pennsylvania.

1. As a commonsense conservative who realizes the importance of the House of Representatives supporting President Trump’s agenda, I will look for a strong conservative leader who can work for the completion of President Trump’s plan for America. There are many outstanding Republicans who have these leadership qualities that I would will be willing to support. At this point in time, it is presumptive, prior to the elections, to endorse any candidate until the electorates have weighed in on who will be their next members of Congress. Clearly, Nancy Pelosi does not have the necessary skill set to fulfill what the voters of south-central Pennsylvania want.

1. The House endured four long years under Speaker Pelosi between 2007-2011. I didn’t vote for her in 2009 or subsequent years and do not see myself ever doing so in the future.

2. The president, like any candidate for office, will need to work hard to earn re-election. He has been doing a great job advancing important pieces of legislation, such as my Strengthening Career & Technical Education for the 21st Century Act, which was signed into law two weeks ago. These type of major policy advances make me want to keep working with the president and he certainly has my support.

1. No, there’s too much back and forth in D.C. I feel that both sides of the aisle are pushing their party agendas and are not focusing on what is good for the country. We need Washington to work together. As of today, Washington is fixed on dividing the country. I also believe that some of the politicians in office have been there for too long, including Pelosi who has been in office since the 80’s, that’s why I am in favor of term limits for Congress.

2. I will always respect the seat of the presidency. However, I would only support a president with my vote if he or she is truly moving our country forward. As long as the president works for the interest of the American people he or she will have my support. I strongly believe that Washington needs to start working for the needs of the people and not for their party’s needs.

1. Nancy Pelosi represents everything we need to change in Washington.  When she previously held the Speaker’s gavel she was a partisan and divisive leader who repeatedly chose party over people and failed to compromise for the good of the country.  We need new leadership and I would not support Pelosi for Speaker.

2. My loyalty is to the people of Pennsylvania’s 4th District and to the country.  While I support 4.1% economic growth, fair trade deals and peace talks in North Korea, I will work with any president one issue at a time.  We don’t even know for sure if the President is seeking reelection and I would not endorse anyone 19 months into a 4-year term.

1. Nancy Pelosi represents the worn-out politics of yesterday. Clearly, I’m not voting with the failed past.

2. I am thinking about one election and one election only: the vote to bring a new generation of leadership to Congress to end partisan gridlock. The president isn’t on the ballot this fall, but the future of our country is.  My focus is on moving our economy forward.

1. The magnitude of these Offices demands that I do my research and stay away from hypotheticals and speculation.

2. I’ll be supporting only candidates who strengthen individual liberties, lesson the scope of government and abide by our duty to protect our freedoms and American way of life.