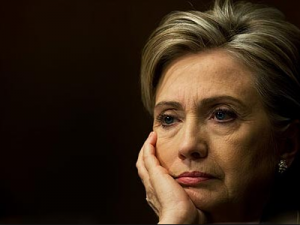 That was Hillary Clinton’s response during a Democratic primary debate concerning some of her past comments on health care. It could also apply to the general election results.

The Democratic nominee bet that she could win over Republican-leaning women outraged at Donald Trump’s behavior and comments. These women would outweigh any gains he made it other areas.

It didn’t work out that way. 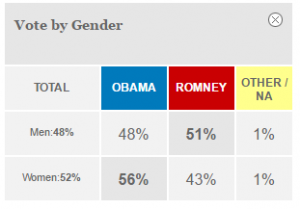 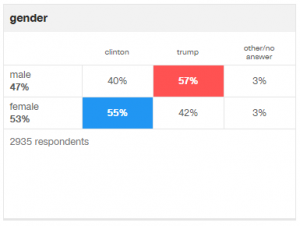 Now, there are questions about the true accuracy of exit polls. While I’ll have plenty of analysis of the voting results once they’re certified, the exit polls remain our best guide to figuring out just want happen on Nov. 8th.

As you can see above, women didn’t mobilize above and beyond for Hillary Clinton yet men ran into Donald Trump’s arms.

You can see just how wide this gender gap was through this chart, which suggests that Hillary did in fact do better with white women. The problem is she did worse with black men than President Obama did. 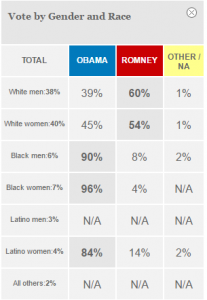 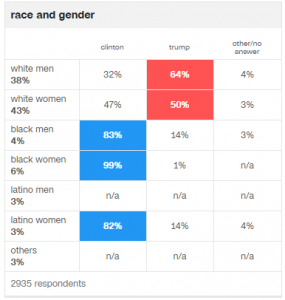 Clinton’s real problem with blacks, though, was turnout. She performed great with African-American voters who showed up. As Al Hunt points out, the drop from 13% to 10% share of the voting population really hurt Clinton.

The largest shift this year, though, occurred along educational lines. 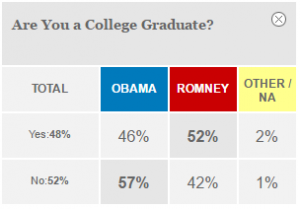 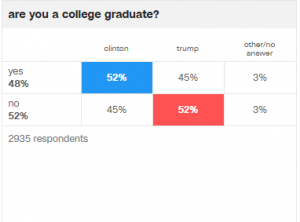 This is the rare double switch in politics. Digging deeper, though, we can find the impetus behind the change. 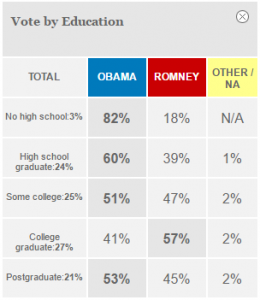 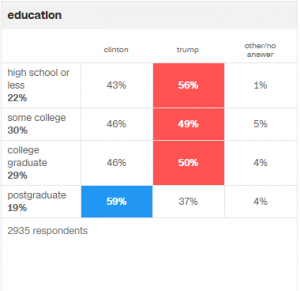 While Hillary’s support with post-grads went up, it absolutely plummeted with high school grads. 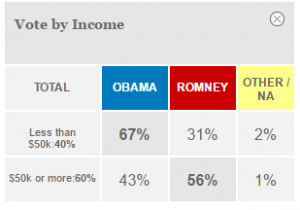 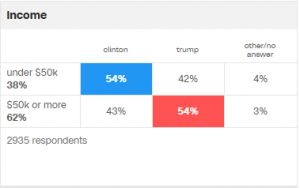 Income was another area where Clinton suffered. Despite the countless pieces you’ve read this year about Trump’s working-class support, she won those who make less than $50,000 a year. The problem is the margin was way less than four years ago. Yet there was basically no change among those making more than $50K a year.

Finally, politics comes down to the simple equation of party turnout. Democrats, Republicans and independents. 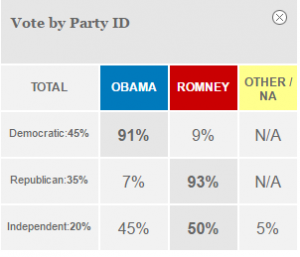 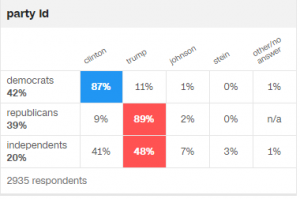 Trump actually did worse than Mitt Romney with Republicans and independents, but an improvement with Dems and a GOP surge cancelled it out.

It’s worth pointing out that Gary Johnson and Jill Stein did make a real difference in that they allowed some independents to pass on the choice between Trump and Clinton.

In the end, though, I think this table provides the best explanation for Trump’s victory. 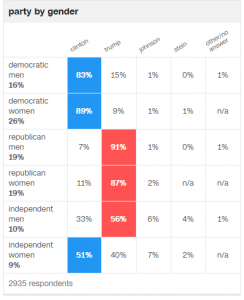 The Clinton campaign believed that Republican women in Southeast PA could cancel out the Democratic men Trump was peeling away elsewhere.

This strategy wasn’t just confined to Pennsylvania either. Clinton made her gender a central selling point of her campaign after pundits came to the conclusion her refusal to embrace the issue cost her the 2008 Democratic primary.

Trump, suitably, was far from subtle about his outreach to males.

In Pennsylvania, fifteen percent of Democratic men went for Trump versus eleven percent of Republican women who chose Hillary.

When 67,952 votes out of nearly 6 million total is the final margin, those few points can make all the difference.

For Trump, the revolution came. For Clinton, it never did.