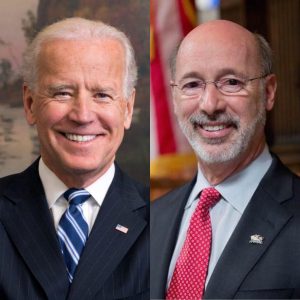 On Wednesday morning, Gov. Tom Wolf announced that he is formally backing former Vice President Joe Biden’s bid for the White House, according to a release from the Biden campaign.

In a statement, Wolf described Biden as a “strong, steady, leader who can best heal our deep divides,” and as a “champion” for a number of key policies that he believes will benefit Pennsylvanians.

“Right now, many Pennsylvanians are living in a time of immense fear and uncertainty — families have lost loved ones, jobs, and a sense of security. In times like these, we need leadership in the White House that we can look to for calm and guidance,” Wolf said in a statement.

“This November, Pennsylvanians have a choice in who will navigate us through the long, arduous process of recovery,” Wolf continued. “I believe that Joe Biden is the strong, steady, leader who can best heal our deep divides and enact legislation to lift up all working Pennsylvanians.”

“Now more than ever, Pennsylvania needs a partner in Washington. We need a champion for our working families, who can make quality health care and education accessible to all families, and won’t boost corporations and rich CEOs at the expense of middle-class people in our state,” Wolf says to conclude his endorsement of Biden. “I’m proud to endorse Joe Biden for President because we desperately need strong leadership in the Oval Office.”

Most of the Democratic elected officials in the state announced their endorsement for Biden over the past few months, with the last significant rollout on March 16 when Attorney General Josh Shapiro, Treasurer Joe Torsella, plus 71 other Democrats throughout the state made their support official for Biden’s bid. Other significant endorsements prior to that rollout for Biden include Sen. Bob Casey, several members of the state’s Congressional Democratic delegation, and more across the commonwealth.

A release on Wednesday morning added that Biden and Wolf will participate in a virtual conversation at 10:30 A.M., which will be open to the press.

According to polling since Biden emerged as the presumptive Democratic Party presidential nominee, the former VP holds an edge over Trump in the Keystone State. The Real Clear Politics Average shows Biden besting Trump by 6.5 points from polls conducted between March 6-April 26.