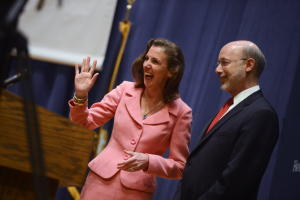 Election day is five months away, but Tom Wolf is already taking over the mantle as head of his party. The battle for leadership of the party has become an early test of the gubernatorial nominee’s clout.

Wolf is lobbying hard to make Katie McGinty – his former rival for the gubernatorial nomination – chairwoman of the PA Democratic Party. He is doing so over the objection of sitting Chairman Jim Burn, who is seeking a second term.

Democratic State Committee members will meet to vote for their leader next weekend in Camp Hill.

McGinty, a former DEP Secretary, officially announced her candidacy on Wednesday. Wolf’s campaign emailed committee members advocating for McGinty for Chair and State Rep. Jake Wheatley of Pittsburgh for Vice Chair. Behind the scenes, Wolf and his team are working the phones.

Burn has refused to step down and has asked committee members for their support. He declined Wolf’s request that he step down.

Burn’s record includes a broad sweep of statewide election contests as well as a party apparatus that has dogged Gov. Tom Corbett – and his approval ratings – effectively at nearly every turn since January 2011. But some in the party have also complained about the chairman’s fundraising performance.

History is on Wolf’s side – and McGinty’s.

“I remember back to my very first meeting when Bob Casey [Sr.] introduced his choice, Harris Wofford, over the phone as he was in Africa at the time.”

Janvey supports McGinty but holds no ill will towards Burn.

“I love Jim Burn,” she said. “But I believe the candidate should have the right to name their own chair. My hope is we spend this entire meeting on defeating Tom Corbett.”

It’s a common sentiment, based on conversations with nearly a dozen committee members and Democratic campaign operatives.

Bucks County Democratic Chairman John Cordisco, for instance, is supportive of Burn – yet also wants to prevent a divisive battle.

“I have a close relationship with Jim Burn, I think he has done an outstanding job as state chairman,” Cordisco said, before making clear he had no issue with McGinty. “Katie McGinty is very capable and I have a great deal of respect for her.”

Cordisco said McGinty had reached out to him by phone on Thursday. He emphasized that he wanted to reach out to his fellow southeastern PA county chairs but ultimately was hoping that everything could be settled before the committee meeting.

McGinty spokesman Mike Mikus was optimistic about his candidate’s chances.

“Yesterday was the first step in the process, we’re confident Katie will win this. She brings the energy, spirit and ability to raise money necessary to the position,” he asserted. “She will focus on counties large and small, we need to be strong everywhere, no county is unimportant in building the party.”

Meanwhile, Wolf’s campaign has been intensely gathering support for McGinty. Given the size of Wolf’s victory and the desire of Democrats to stay united in the campaign, it’s expected that heavy pressure will be brought on Burn to step aside before any voting occurs.

Neither Burn nor Wolf’s campaign responded to requests for comment.

Beyond the contest for party chair, the situation underscores a gap between Tom Wolf’s public persona and his inside game.

Despite the campaign ads that cast him as an outsider, Wolf and his team are very familiar with the state committee process. Wolf’s top campaign adviser is Mary Isenhour, who served as the party’s Executive Director under Governor Ed Rendell.

Burn, an attorney and Allegheny County Councilman, took Rooney’s spot after the 2010 primary. Gubernatorial nominee Dan Onorato initially intended to support York Mayor Kim Bracey for the spot, but Burn, with the backing of U.S. Senate hopeful Joe Sestak, convinced Onorato not to.

Wolf is undertaking an effort to bring the Democratic insider forces together. Being a former member, along with McGinty, of the Rendell cabinet as well as a long-time party donor, Wolf is no stranger to the Democratic committee. Still it’s imperative that he succeeds at the party’s state committee meeting next weekend without looking like a party boss (despite the obvious fact that he now is the party’s boss).

Ultimately, the goal for Tom Wolf is to come out of these next few days stronger than he entered them. If he does, he moves one step closer to the Governor’s Mansion, if he doesn’t he gives Tom Corbett a real opening.