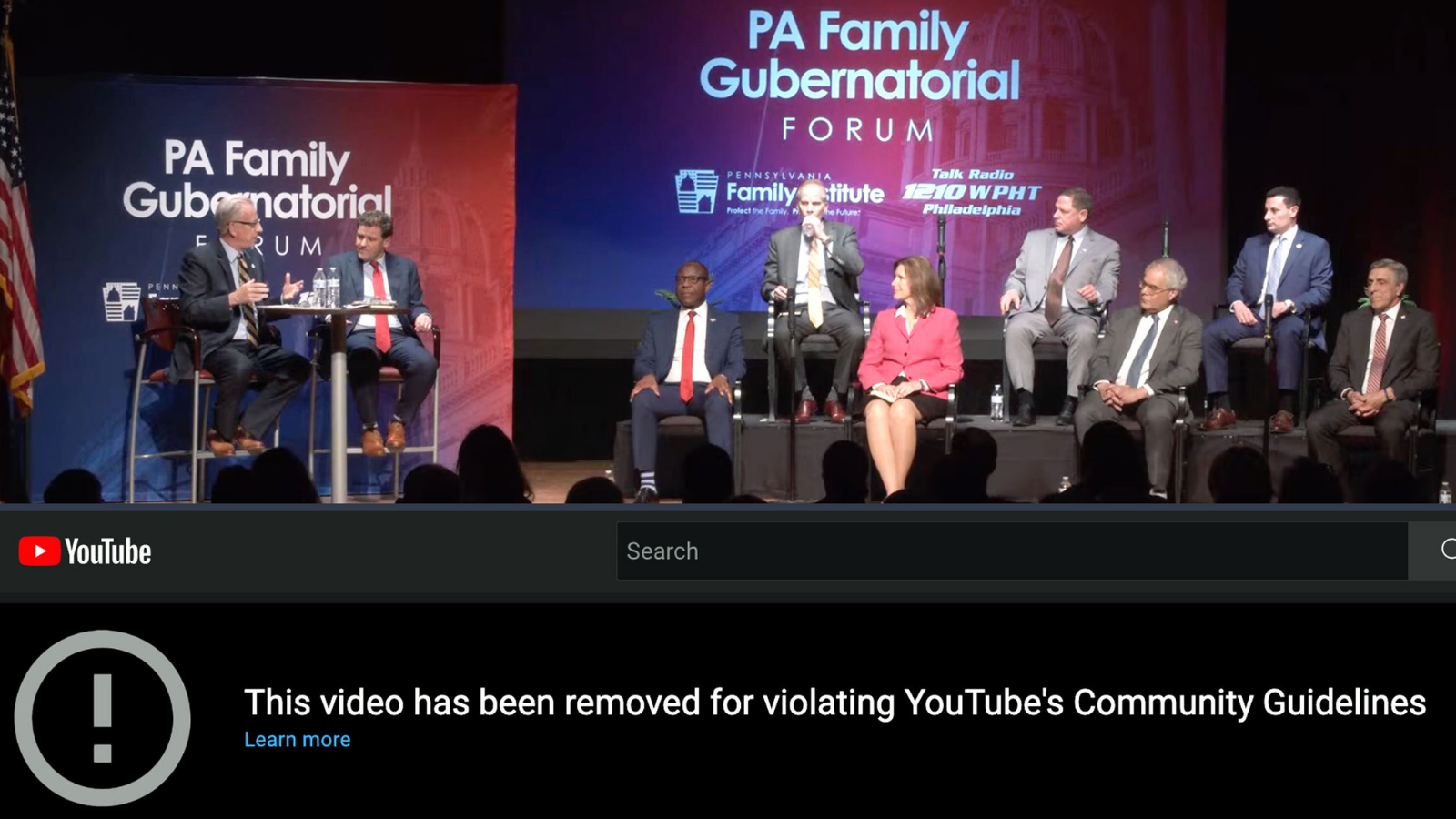 In a turn of events, YouTube has taken down the recorded livestream video of last Thursday’s Pennsylvania Family Institute Republican Gubernatorial Candidate Forum at Cairn University in Langhorne.

The two-hour event featured seven of the GOP primary candidates for Governor who responded to questions from moderators Michael Geer, Pennsylvania Family Institute president, and Rich Zeoli, talk radio host on 1210 WPHT AM in Philadelphia.

YouTube’s community guidelines state that “certain types of misleading or deceptive content with serious risk of egregious harm are not allowed on YouTube. This includes certain types of misinformation that can cause real-world harm, like promoting harmful remedies or treatments, certain types of technically manipulated content, or content interfering with democratic processes.”

When it comes to Elections, it continues with, “This includes certain types of misinformation that can cause real-world harm, like certain types of technically manipulated content, and content interfering with democratic processes.” The policy does refer to “candidate eligibility” and “content that advances false claims related to the technical eligibility requirements for current political candidates and sitting elected government officials to serve in office.”

“YouTube offered no specifics of what is alleged to be in violation, beyond indicating that it had to do with content related to the 2020 Presidential election,” said Geer in a statement. “That election was not mentioned in our questions, and we can only conclude that the YouTube censors did not like the answers given by one or more of the candidates.”

Dave White, one of the seven GOP candidates at the Forum, responded in a press release, “This is another example of the leftists in Big Tech trying to silence conservatives, specifically traditional values conservatives.  Apparently standing up for the sanctity of human life and defending the rights of young girls who want to play sports is out of bounds for YouTube.  The beauty of our First Amendment is that it is not simply freedom of speech, but the freedom to exercise that speech, which includes making our voices heard at the ballot box.  YouTube may be able to silence us on their platform, but they will not silence us this November.”

Another of the candidates at the Forum, Lou Barletta, tweeted that “Big Tech is absolutely out of line censoring the Gubernatorial Forum from YouTube! I was proud to participate in this forum and discuss the important issues facing PA. Just because Big Tech doesn’t agree with our politics does NOT give them the right to silence us!”

“This is a blatant assault on free speech, free elections, on the ability of candidates to freely state their views, and on the right of citizens to hear the varied perspectives of those who are seeking their votes,” said Geer. “It hinders the process of democracy, shuts down the free marketplace of ideas, and ironically, further erodes confidence in our elections.”

“YouTube has once again canceled out an opportunity for people to hear from major party candidates for the highest office in one of the biggest states in the Union,” said Charlie Gerow. “They don’t want the people of Pennsylvania, the politically most important state in America, to hear from Republican candidates for governor. This is frightening censorship of mainstream discussion and debate and needs to be overturned immediately.”

YouTube has received other complaints about removing videos. including one from Colorado representative Lauren Boebert who complained to Newsweek that her CPAC speech was removed due to censorship. And, according to the Washington Post, more than a dozen accounts across YouTube and Twitter were posting false narratives about the war in Ukraine in line with the Kremlin’s talking points, without labels or limits.

The Forum can be heard via podcast.

updated to include Gerow quote