Jobs, jobs, jobs. It’s the number one issue on voters’ minds, and the candidates for Allegheny County Executive know it. Over the past week, they have launched a sparring match about job creation and modernization of county government. 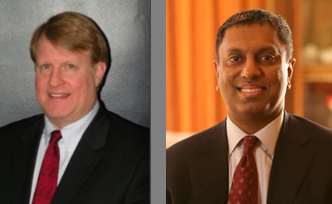 Republican D. Raja of Mt. Lebanon recently announced his second major policy initiative, a six point plan that he aims to implement with the goal of modernizing the county government and to bring it to 21st century form.

“The county government is antiquated and in need of a serious upgrade. These changes are practical, realistic, and will save the taxpayer’s money. We need a new direction in Allegheny County and it starts by bringing this government into the 21st century. The same old politicians either can’t do it, or they won’t do it. It is time for a new direction,” says Raja.

“Despite Raja’s rhetoric, his abysmal record as Mt. Lebanon commissioner shows he failed miserably when it comes to reforming government”, says Fitzgerald, who also suggested that Raja failed to implement a technology corridor in the municipality.

Fitzgerald’s campaign manager, Mike Mikus, attended the conference where Raja’s plan was released. He said that while his candidate attends neighborhood gatherings, Raja is busy focusing on conducting news conferences.

Fitzgerald’s approach in order to create a competitive job market for the future in Allegheny County is to encourage small business owners to stay and expand within the county in order to keep it competitive. He also plans on working with institutions of higher learning to train students and retrain adults for better jobs in the region.

During Fitzgerald’s tenure in office, Allegheny County has experienced an unemployment rate lower than the national average since 2007 and is currently more than 2% lower than the national average (a fact oft-noted in campaign materials). He also boasts that while on county council, he worked to save millions of dollars by consolidating the county’s 911 system and it’s row offices.

In response to the allegations made against him, Mr. Raja has pointed out a distinct difference between himself and Mr. Fitzgerald that he believes may make him more competitive for the position.

“There is a stark contrast in this race. My opponent has had the opportunity, as a member of county council for over the decade, to make these efforts a reality and has failed to do so. My opponent has no plan and no solutions, just the same ‘politics as usual’ rhetoric that this county has heard for too long,” he said. “If you want somebody with a plan and a solution, that’s somebody standing right in front of you.”