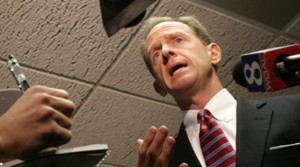 Though Congress and the White House beat Tuesday’s debt ceiling deadline, the Commonwealth’s own United States Senator Pat Toomey was one of 26 members to vote against the legislation. Toomey joined Representative Mike Doyle (PA-14) as the only Keystone State elected officials to reject the measure, a reflection of the ideological balancing act the bill managed to traverse.

A stalwart conservative, Toomey opposed the measure on the grounds that it “[did] nothing to deal with the path of our government’s unsustainable deficit spending.”  The freshmen senator expressed concern that the deal cut too little spending in the short term and that a future Congress could simply renege on longer-term budget slashing.

“While I appreciate the hard work and effort that has gone into this deal, it simply does not contain meaningful spending cuts, nor does it put us on a sustainable fiscal path,” Toomey said on the eve of the Senate’s vote.

He then qualified that statement on Tuesday, explaining that he “acknowledge[d] you can make a strong argument in support of it,” and described the deal as “real progress.”

Throughout his first eight months in office, Toomey has become a conservative mainstay in debates about the country’s economic future.  He introduced failed legislation months ago – which he revisited last week – to instruct the Treasury to prioritize debt payments, Social Security reimbursements and military salaries in the event that the federal government could not reach a debt ceiling deal ahead of last Tuesday’s deadline. He feuded publicly with Treasury Secretary Tim Geithner over the efficacy of such a plan.

Throughout the months-long debt debate, Toomey solidified his status as one of the GOP’s emerging fiscal leaders – sometimes to the chagrin of his own party leadership. Senator John McCain lambasted Toomey on the floor, describing the fiscal views Pennsylvania’s junior senator and some colleagues were espousing as “flawed.”

Nevertheless, Toomey and others continued to take a hard-line stance in favor of raising the debt ceiling only if that action was accompanied by a balanced budget amendment, extensive cuts to entitlement programs and no tax increases.

It’s a calculation voters won’t have a chance to weigh in on for years.  With his next election cycle in 2016, Toomey has a substantial buffer between this vote and his next ballot appearance. For now, Pennsylvania’s junior U.S. Senator will remain, and perhaps embolden, his conservative stance on political issues, as well as his economic leadership within the GOP.

Jared Edgerton contributed to this report.