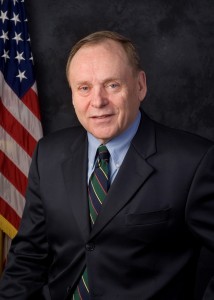 Geist, a veteran lawmaker and Chairman of the powerful Transportation Committee, has served since 1979. He was challenged this year by John McGinnis, a finance professor at Penn State Altoona. McGinnis criticized Geist for his votes to raise legislative pay, as well as his frequent calls for more infrastructure spending (and corresponding taxes).

The video above is the ad by the Citizens Alliance for Pennsylvania, a conservative group that spent about $30,000 to topple Geist.

“The absentee ballots and write ins were counted yesterday and John [McGinnis] is ahead by 183 votes,” said Stickel. “I doubt that will change. On the Democrat side Rick received 172 write in votes and will not appear on the ballot. Richard Flarend received 306 write in votes which will put him on the ballot in November.”

Flarend is also a professor at Penn State Altoona; he teaches physics.

The outcome was confirmed by a consultant working with the McGinnis campaign.

“My congratulations go out to the Democratic Nominee Brian Sims and all of his supporters,” she said. “Throughout many difficult, but successful races in my long service, I have consistently said that the voters are always right. I cannot change my tune now. I am truly grateful to the voters for allowing me to serve them for so long and for the opportunity to work with so many dedicated, talented, patient and professional colleagues, staff members and volunteers.

“I have always been about policy first, so I look forward to working with Brian Sims to represent the very special constituents of the 182nd. I will find other ways to contribute to my neighborhood, city, state, and nation.”