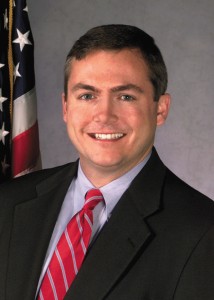 State Senator Matt Smith, a Democrat representing the 37th district, is set to resign his seat in the legislature.

Senate Minority Leader Jay Costa announced Smith will be stepping down to take over as President of the Greater Pittsburgh Chamber of Commerce.

Smith’s district consists of Allegheny and Washington Counties. He has served since as State Senator since 2013. Before that, he represented the 42nd district in the PA House from 2007 to 2012.

“For the past three years, Sen. Smith has served as a thoughtful and distinguished member of the Senate Democratic Caucus and was an advocate for hardworking people all across Allegheny and Washington counties,” Sen. Costa said. “He is a man of great integrity, whose background makes him the ideal candidate to serve as the President of the Greater Pittsburgh Chamber.”

“Matt has earned the respect of everyone who knows and has worked with him,” he continued. “This position will give Matt the opportunity to expand on his record of public service and build from his years of work in the House and the Senate.”

“Matt was a catalyst for change within the Senate and had a firm grasp on issues of importance to his constituents. He will be sorely missed by the entire caucus,” Sen. Costa concluded. “Our loss is truly the Greater Pittsburgh Chamber of Commerce’s gain.”

“It has been an honor and a privilege to serve the people of the commonwealth and represent the residents of the 37th Senatorial District,” outgoing Sen. Smith responded. “I would like to thank my constituents for entrusting me to be their advocate in the district and at the state level, and want them to know that even as I leave public office I will continue to work to make our region stronger and prepare our workforce to compete in the 21st century economy. I would also like to thank Sen. Costa and all of my Senate colleagues for their partnership and support during my time in the Senate and as I transition into this new role.”

No plans have been made so far to fill Sen. Smith’s seat.