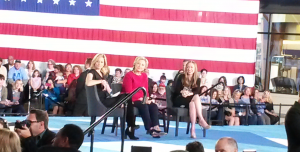 So on Tuesday, she came to Delaware County with her daughter and a famous actress to hold a town hall on families.

Elizabeth Banks moderated the forum (“Isn’t she pitch perfect?” Clinton commented) which began with some remarks from the three about being mothers and then proceeded to questions from the audience.

The first question came from Brennan, State Senator Daylin Leach’s daughter, who clearly touched the candidate with her question on body image.

“At my school, body image is a really big issue for girls my age,” Leach asked. “I see with my own eyes the damage Donald Trump does when he talks about women and how they look. As the first female president, how would you undo some of that damage and help girls understand that they are so much more than just what they look like?”

“Wow. I am so proud of you for asking that question,” Clinton began. “You’re right. My opponent has just taken this concern to a new level of difficulty and meanness. And it’s shocking when women are called names and judged on the basis – solely on the basis – of physical attributes.”

The former Secretary of State proceeded to discuss the ways the media shapes how women and girls view themselves and lamented the online bullying that takes place against teenage girls. She also hit Trump for his comments about Alicia Machado.

“My opponent insulted Miss Universe. I mean, how do you get more acclaimed than that? But it wasn’t good enough.”

The second question went to a mother who lost a son to gun violence and then had another son commit suicide afterwards.

“Here’s what I think we need to do,” the Democratic nominee stated. “We need comprehensive background checks. We need to close the online loophole. And we need to do everything we can to close the gun show loophole. And we need to do a much better job, which was the original purpose of the NRA. Originally they were supposed to be doing safety education. And I know people who took their courses. Now they’ve turned themselves into a total shill for the gun makers. And we’ve got to reverse the liability protection given to gun makers and sellers so that they can be held accountable. And we have to finally pass a common-sense bill – your Senator, Bob Casey, was on the floor arguing for it last summer – a bill to prohibit people on the terrorist watch list from buying weapons in America. And everything I’ve just said is supported not only by a big majority of Americans but a big majority of gun owners.”

The next query came from a black mother worried about her children, particularly her two sons, being the victims of police violence.

“That is the reality,” Clinton responded. “What she is talking about is what black parents live with every day. I was in Charlotte on Sunday, and I was speaking at a church. And I said, “Look, I have these two absolutely wonderful grandchildren. I will never have to sit them down and tell them to be afraid, to be careful.’”

She proposed more empathy, criminal justice reform and reducing the number of guns on the streets as solutions.

A Haverford Township Commissioner got the next opportunity and he asked about how Clinton would work with local governments.

“You know I wrote a book called It Takes a Village,” she said. “Well, the village has to be there for people. So what are we going to do? I’m going to look for ways to be as good a partner and to use whatever federal funding we can to support you in achieving the goals that you set for yourselves and your communities.”

Another teenage girl got a question and she wanted to know more about the candidate’s plan for college. Clinton answered that the government needs to provide the states with more funding and reduce the interest rates on loans.

The student also mentioned that she participated in a middle school debate pitting Clinton against Trump and she represented the Democratic nominee and won.

“Well, first of all, thanks for winning the debate,” Clinton joked. “That makes us 2 and 0.”

Finally, another girl took the microphone and thanked the candidate for shepherding the Children’s Health Insurance Program (CHIP).

“I just wanted to say thank you for passing the Children’s Healthcare Insurance Plan because you have changed my life,” she stated. “I would not be here standing today better than I was if not for you and that plan, so thank you.”

After about 50 minutes the forum wrapped, and the nominee headed out to Harrisburg to hold a rally and take questions from the press. It was her first visit to the Philly suburbs this year but it may not be her last.