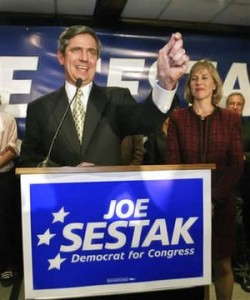 Former Congressman and Senate candidate Joe Sestak is famous for his prolific and detailed press releases, each capped off by a lengthy bio statement.

Now Sestak is back with a new bio statement to show for his 2010 experience, explaining his success relative to many PA Democrats.

It comes in first place with 259 words to the 238 words of the previous edition.

Here’s the bio from the latest email sent out by the Sestak camp:

“Former 3-star Admiral Joe Sestak served in the Navy for 31 years and then as the highest ranking military officer ever elected to Congress when he represented Pennsylvania’s Seventh Congressional District from 2007-2010. He commanded an aircraft carrier battle group that conducted operations in Afghanistan and Iraq with 30 U.S. and allied ships and more than 15,000 sailors and 100 aircraft. Prior to that, Joe served as President Clinton’s Director for Defense Policy on the National Security Council and the first Director of the Navy’s anti-terrorism unit after 9/11.

“In 2006, Joe defeated a ten-term incumbent in his home District, which was 55 percent Republican. As a member of the Armed Services and Education & Labor Committees, and as Vice Chairman of the Small Business Committee, Joe would have ten pieces of legislation signed into law. In his first term, he was named the most productive member of his freshman class by the Majority Leader’s Office.

“Joe ran for U.S. Senate in 2010, bucking the entire Democratic Party leadership because he believed Pennsylvanians deserved a leader who would always put their interests first, even ahead of his party. Against all odds, he rallied from an initial 40 point deficit to win the nomination over a 30-year incumbent. After the primary, Joe continued to run as the candidate with a pragmatic, independent approach in a Senate election decided by only two points in a year when the party lost the governor’s race by 9 points and lost five Pennsylvania Congressional seats by 8 points or more.”

For your reference, here is the former statement:

“Joe Sestak was elected to Congress in 2006 after a distinguished 31-year career in the United States Navy, and he is honored to represent the Southeastern Pennsylvania district where he was born and raised. He is a Democratic candidate for the U.S. Senate seat from Pennsylvania.  During his Navy career, Joe attained the rank of 3-star Admiral, served in the White House as Director for Defense Policy on President Clinton’s National Security Council, served in the Pentagon as Deputy Chief of Naval Operations, and led a series of operational commands at sea, culminating in command of the USS George Washington Aircraft Carrier Battle Group (30 ships, 100 aircraft, and 15,000 sailors/marines/aviators/SEALs) during combat operations in Afghanistan and Iraq. In our nation’s time of crisis in the immediate aftermath of 9/11, the Navy turned to Joe Sestak to serve as the first Director of “Deep Blue,” the Navy anti-terrorism unit formed in response to the attacks. Joe is the highest-ranking former military officer ever elected to either branch of Congress. He graduated second in his class from the U.S. Naval Academy and holds a Master’s in Public Administration and a PhD in Political Economy and Government from Harvard University. Joe lives in Delaware County, Pennsylvania, with his wife, Susan, and daughter, Alex, and proudly represents the 7th District, where his mother and many of his seven siblings still reside.”