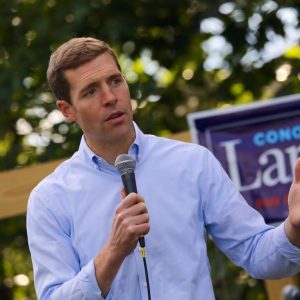 Rep. Conor Lamb (D-Allegheny) will get a second full term for this western PA district.

Lamb declared victory over GOP challenger Sean Parnell in the race for the 17th Congressional District, on Wednesday night.

Lamb leads by just under 1 point with 92% of votes reported, according to the New York Times. Lamb entered Wednesday trailing in the race, but clawed back and gained the lead on Wednesday evening.

“Last night, despite previously calling for every vote to be counted, Conor Lamb claimed victory practically the minute he took a slim lead in this race,” said Parnell campaign manager Andrew Brey. “Unless Lamb has a sixth sense that helps him precisely determine vote totals from outstanding precincts in this razor’s edge race, he should exercise the restraint that he was calling for while significantly behind.”

Although multiple national outlets rated this race in Lamb’s favor throughout the campaign, the race seemingly was closer than expected. Lamb won by double digits over Rep. Keith Rothfus (R-Allegheny) in 2018.

Unlike his 2018 bid, the GOP challenger proved to be a successful fundraiser with Parnell outraising Lamb in the 2nd and 3rd quarters of 2020, although Lamb narrowly edged him out in the final pre-general election filing.

President Donald Trump seemingly took a personal interest in this race more than any other congressional showdown in the state by tweeting out his support for Parnell on multiple occasions and attempting to paint Lamb as a “puppet” of Speaker Nancy Pelosi.

Lamb consistently hit Parnell on opposing the Affordable Care Act, while the GOP challenger aimed to link the incumbent Democrat to the liberal win of the party in this swing district that narrowly supported Trump in 2016, although Biden appears to be outperforming Sec. Hillary Clinton in this race.

This story was updated with a comment from the Parnell campaign.