Leadership Change at PennFuture: Jarrett Out 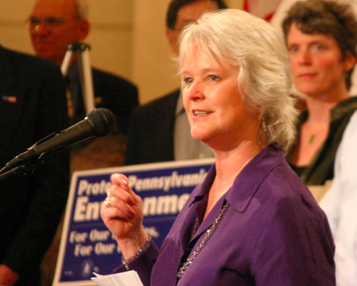 Update: A spokeswoman for PennFuture said the DCED issue had nothing to do with Jarrett’s departure.

“We’re refocusing much more on our legal work,” said Director of Communications Jeanne Clarke. “The board decided we wanted a lawyer to lead the organization.”

Months removed from suffering the public embarrassment of returning a $138,000 grant from the Department of Community and Economic Development, the prominent environmental group PennFuture announced Mondsay that they are undergoing a change in leadership.

The Citizens for Pennsylvania’s Future, called PennFuture, announced that their President and CEO Jan Jarrett has resigned. Former Department of Environmental Protection official George Jugovic Jr. will be taking over her post. Before joining PennFuture, Jugovic served as the DEP’s southwest regional director.

Jarrett was at the helm of the organization last fall, when they were forced to return the full amount of a two-year grant from the DCED that was supposed to allow the group to provide energy conservation information to school districts and local government.

Instead a investigation from Governor Corbett’s office uncovered PennFuture had hired an outside consultant to complete the grants mission and then “repurposed” the rest of the funds for other endeavors, all without the required approval of the DCED.

In an interview with Patriot-News, Jan Jarrett took the blame for the mistake.

“I didn’t read it. My bad,” Jarrett told Patriot-News. “That’s the primary reason we just decided not to quibble and give the money back.”

Now PA’s leading environmental advocacy group is looking to turn the page under the guidance of their new leader Jugovic.

“I’m honored to lead PennFuture, and grateful for the visionary leadership Jan provided,” said Jugovic in a statement. “PennFuture will emphasize its core mission of rigorously protecting Pennsylvania’s environment and advocating for a clean energy in boardrooms and, if necessary, in court rooms.”

PennFuture is among the more moderate environmental organizations in Pa. They are currently the largest such group not to call for a moratorium on Marcellus shale gas drilling, citing its utility as cleaner, bridge fuel. Their former President and CEO John Hanger went on to serve as DEP Secretary in the Rendell administration.