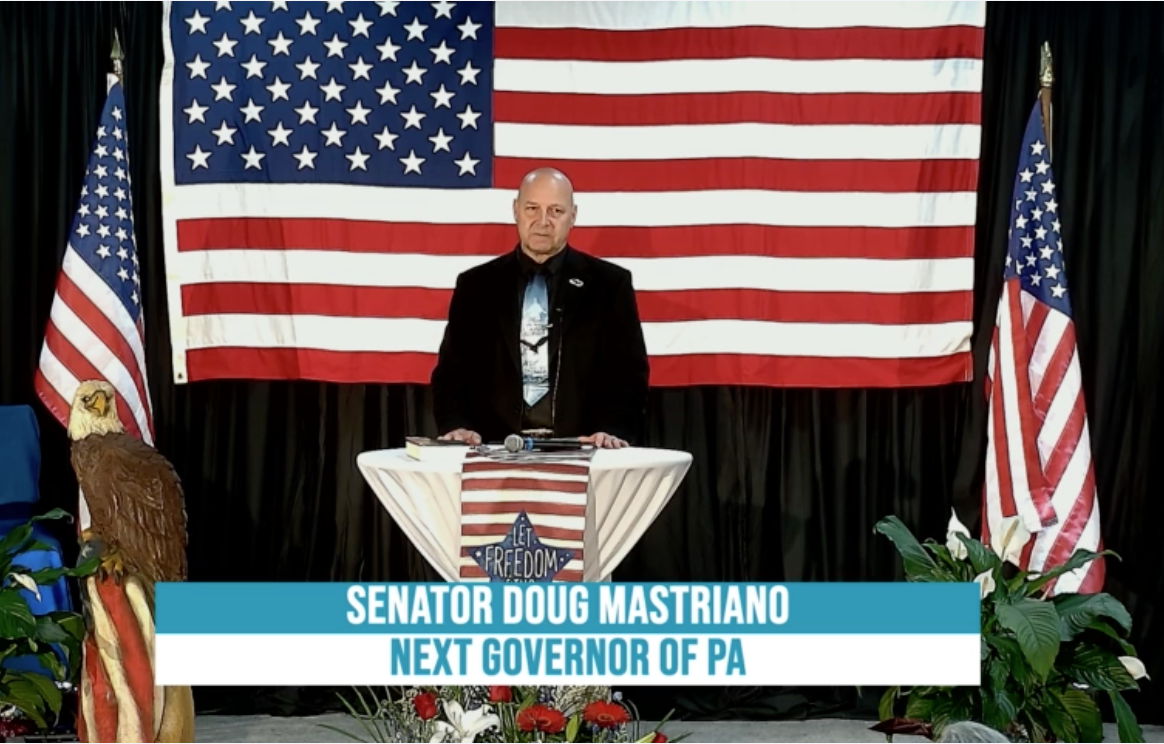 GOP candidate for Governor Doug Mastriano was a speaker at the “Patriots Arise” conference in Gettysburg last weekend. The event was hosted by a pair of QAnon activists and deeply steeped in the language of right-wing Christian fundamentalism. 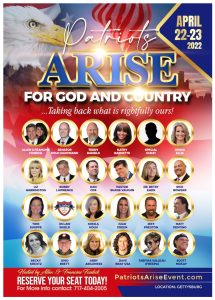 Mastriano, a state senator from Franklin County, was prominently featured on the Patriots Arise website promoting the event, along with former Trump administration staffers Jenna Ellis and Liz Harrington, candidate for Pennsylvania lieutenant governor Teddy Daniels, Trump-endorsed Maryland GOP gubernatorial candidate Dan Cox, and Republican candidate for attorney general in Maryland Michael Peroutka, who once had ties to the League of the South, an organization that the Southern Poverty Law Center has classified as a hate group.

Talking about his subpoena from the January 6 select committee, Mastriano said “The left with their subpoenas. I’m one of the 86. I wear that proudly. The badge of honor. [crowd gives standing ovation] I love it. That means I was actually doing my job as a citizen and as a senator in Pennsylvania.”

“We’re going to win on May 17 with your help,” he said. “And in November we’re going to take our state back. My god will make it so,” according to VICE.

His speech argued that America is a Christian nation, mocking the “myth of the separation of church and state.” At its conclusion, Mastriano was awarded a “Sword of David” by the event’s co-hosts – Allen and Francine Fosdick – who have promoted QAnon conspiracy theories according to Right Wing Watch, a website that monitors the far right. are thought to be QAnon conspiracy theorists.

According to Media Matters, the Fosdicks promote QAnon propaganda on their podcast. They posted a June 19 video to YouTube which promoted QAnon and featured Allen wearing a QAnon-themed shirt. During the video, Francine compared her belief in QAnon to her faith in Jesus, stating: “A lot of people who, who at first were all gung ho for Q and now they’re saying, ‘Well, you know, Q isn’t real or is he?’ And, you know, my thing is OK, well, a lot of people believe in Jesus, like we all do, and some don’t. It doesn’t make him not real, you know what I mean?”

Once part of the GOP fringe, QAnon adherents have become an increasingly mainstream part of the Republican base. They claim among other things, that “a group of Satan-worshiping elites who run a child sex ring are trying to control our politics and media,” The New York Times reported last September.

According to the Philadelphia Inquirer, a video shown early Friday featured a kind of greatest hits of conspiracy theories that have circulated for decades. It showed images of the Twin Towers collapsing on 9/11 — with the label “false flags.” It claimed John F. Kennedy was assassinated because he “knew too much” and posed a “high risk of cabal exposure,” that vaccines amount to “genocide therapy,” and that Hitler faked his death. It offered other conspiracy theories about the atomic bomb, the Spanish flu, 5G, the 2008 financial crisis — and, of course, the 2020 election.

Mastriano also raised money during the event, as a print of former president Donald Trump was auctioned off for $4,000 – with proceeds given to Mastriano’s campaign.

“Painting print of President Trump done by Jeff Preston auctioned at event and sold for $4,000. All proceeds go to Mastriano campaign,” Mastriano wrote on Facebook. “Your giving means a lot!”

Daniels, aligned as Mastriano’s running mate, warned the audience that “we are at war in this country, we are losing this country. I’m about civility too. We’re civil with Japan, we’re civil with Germany. How’d we get there? We beat the crap out of them. We will be civil on our terms, not theirs.”

Mastriano and Republican Pennsylvania Supreme Court candidate and Philadelphia County Court of Common Pleas Judge Paula Patrick were scheduled to appear at a similar event in June 2021. An event description touts the QAnon slogan “WWG1WGA” (where we go one, we go all). Both said they did not attend.