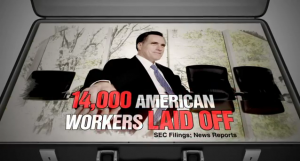 Liberal super PAC Priorities USA Action released a new ad in Pennsylvania Thursday attacking Republican presidential candidate Mitt Romney. The 30 second spot blasts him for profiting off the bankruptcy of companies owned by Bain Capital while he was CEO of the private equity firm.

“Briefcase,” a 32-second ad buy running in Colorado, Virginia, Florida, Ohio and Pennsylvania, calls into question Romney’s support for the middle class by claiming that the former Massachusetts governor profited off the failure of companies during his time at Bain.

“Romney bought companies, drowned them in debt.  Many went bankrupt,” the narrator of the ad said.

“Thousands of workers lost jobs, benefits and pensions. But for every company he drove into the ground, Romney averaged a $92 million dollar profit.”

“President Obama’s allies are continuing their misleading attacks on free enterprise in an attempt to divert attention from this president’s abysmal economic record. If President Obama had half the job-creation record that Mitt Romney has, he would be running on it,” she said.

“President Obama has the worst job-creation record of any president in modern history, so his allies are trying to run a campaign based on distraction, not solutions. On Day One, Mitt Romney will put in place policies that will unleash the private sector and help create jobs.” – Kate Meriwether, Romney Spokesperson

Priority USA Action’s latest ad buy is fifth in a series of the group’s $10 million ad campaign that call into question Romney’s claim of being a “job creator” during his time at Bain and as governor of Massachusetts.

Paul Begala, senior advisor for Priorities USA Action, said in a press release that the ad demonstrates how a Romney presidency would cater to wealthy Americans at the expense of the middle class.

“Even when companies endured layoffs or even bankruptcy, even when workers lost promised health and retirement benefits, Romney found a way for he and his partners to make millions,” Begala said.

“Romney’s same approach to the Presidency will devastate the middle class, while pursuing policies that benefit himself and the wealthiest Americans.”