PA-8: Candidates Face-Off in Round 1 of Back-to-Back Debates 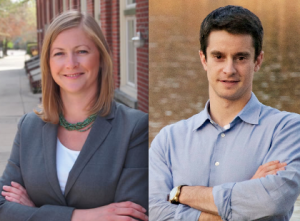 The candidates met at the Linconia Tabernacle Christian Center in an event sponsored by the Lin-Park Civic Association and the Bucks County Chapter of the NAACP.

Each candidate was given five minute opening statements and used their time to set the tone for their remarks for the rest of the evening. “When I do something I go all in,” Strouse said as he talked mainly about his experience as an ex-Army Ranger.

Meanwhile, while Naughton touched on her background as well she spent most of her time hitting incumbent GOP Congressman Mike Fitzpatrick. “I am running to replace Mike Fitzpatrick,” she plaintively explained.

The moderator took a chance to ask one question to each candidate and then opened the floor to the audience who provided most of the sparks of the night. As is usually the case with events like these several attendees use this opportunity to ask important, pertinent questions and others use it to give personal political speeches.

One member of the audience in particular stood out. A Vietnam veteran named Rob clad in a T-shirt featuring an eagle, the American flag, and the Declaration of Independence got into a heated argument with Naughton.

It started during someone else’s question about efforts to expand voting rights. Naughton noted that you need an ID to vote but not to buy a gun. “That’s not true!” Rob injected.

A few minutes later, when his turn came up, Rob went on a long tangent criticizing Harry Reid for not offering a budget and blaming the White House for shutting down the government.

The most contentious part of the exchange came when Rob questioned Naughton’s assertion that guns can be bought without ID’s. She answered that through the gun-show loophole they could be, while Rob was convinced otherwise. (Naughton is actually correct on this point). The two went on to argue about the voter ID law and the government shutdown, until the moderator finally urged him to sit down.

“We’ll see you on the campaign trail,” Rob finished. Suffice it say, Rob did not seem to be a likely Democratic primary voter.

Meanwhile the contentious rhetoric between the candidates was mostly subdued with one major exception. During a response about campaign finance, Naughton asserted that the majority of her money came from small donors while other candidates got their wealthy parents to donate to campaigns who then donate back to the candidate. She then identified Strouse by name as this candidate.

Strouse appeared nonplussed and didn’t look up as he was taking notes. Later on, however, he answered his opponent’s charge.

For their closing statement each candidate was asked about why someone should vote for them instead of their opponent. Naughton stuck to her focus on Fitzpatrick. “I know this district as well as he does,” she pledged. “I will hold him to his record” on his votes to, in Naughton’s words; privatize social security, redefine rape, and shutdown the government.

Strouse stuck to his own personal background telling a story that is likely the closer to his stump speech (and if it’s not, it should be). In 2003, his leg cramped up on a mission on the Afghan-Pakistan border but he was helped up by his squadron. “That experience is what the United States is, eventually everyone is going to need a helping hand,” he concluded.

In terms of policy, there was little difference discovered during the debate. Personality-wise Naughton was more passionate while she spoke and usually sat stoically during her opponent’s turn. Strouse, on the other hand, was almost always jotting down notes while not speaking and kidded attendees he recognized. Overall, both first-time candidates handled themselves well enough in their first public encounter.

They’re set to face off again on Tuesday at the Bucks County Community College from 12:15 to 1:30.