Rothfus to Seek Rematch with Altmire

Rothfus, an Edgeworth lawyer who scored an upset win over former U.S. Attorney Mary Beth Buchanan in the 2010 GOP primary, said he plans to submit paperwork to the Federal Election Commission this week so he can begin raising money, he said. 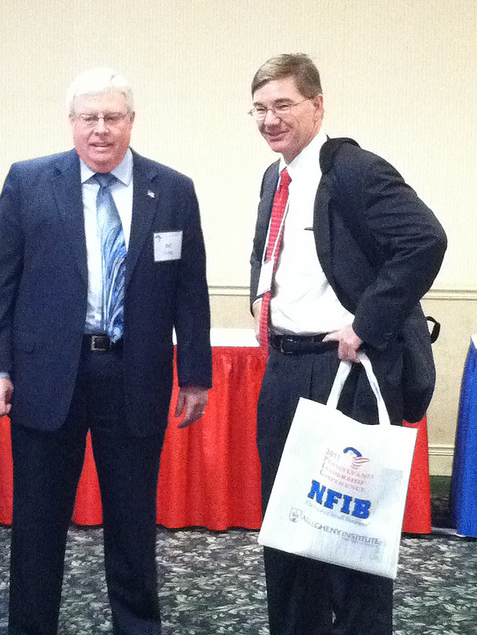 “My intention here is to run against Jason Altmire,” Rothfus said. Altmire beat Rothfus by 1.6 percentage points in November.

It comes as little surprise. Rothfus has been keeping up political ties across the state. PoliticsPA has already seen him at GOP state committee and the PA Leadership Conference this year (pictured).

Why announce so early? Rothfus says he needs a head start on raising money. He carries over $200,000 in campaign debt from his 2010 run that he’ll need to retire in order to get in the black. But take with a grain of salt whispers that this campaign is about paying back debt. After all, critics said the same thing about Congressman Lou Barletta.

Rothfus acknowledged that district lines have yet to be drawn for 2012, and said he plans to run against the winner of a hypothetical Altmire v. Mark Critz primary, a widely expected outcome of this year’s redistricting. It’s also possible that such a district would be more favorable to Democrats than the current iteration of PA-4.

Perhaps most interesting was a line in Wereschagin’s story that Rothfus might even be open to a primary challenger against Rep. Tim Murphy, depending on how the lines are drawn.

“She did not rule out a primary challenge to either Rep. Mike Kelly of Butler or Rep. Tim Murphy of Upper St. Clair, the two Republican congressman from Western Pennsylvania,” Wereschagin wrote. The line has been removed from the story.

“Our entire focus right now is Altmire,” she said, emphasizing that Rothfus is interested only in challenging a Democrat. “If it’s Critz, it’s Critz.”