If the Republicans nominate Donald Trump, they’ll be in a significantly worse situation when it comes to the electoral college math.

That’s the conclusion of Larry Sabato, Kyle Kondik and Geoffrey Skelley, who shift thirteen states (and an extra electoral vote) closer to Hillary Clinton in a hypothetical November match-up with Trump.

One of those states is Pennsylvania, which would move from “Leans Democratic” to “Likely Democratic”.

“Trump supporters and some independent analysts assert that his appeal to many blue-collar whites in Rust Belt states (such as Michigan, Ohio, Pennsylvania, and Wisconsin) could pull these states’ electoral votes into the Republican column,” they write. “The problem is, there is little evidence that the non-college voters supporting Trump in the primaries are defectors from the Democrats; most have been backing GOP candidates fairly consistently, so the net addition for Trump could be small.”

“Nor do we buy the theory that increased Republican primary turnout this year means Trump is going to bring out millions more white and primarily male voters that weren’t excited by John McCain in 2008 and Mitt Romney in 2012,” they continued. “Maybe there will be higher white male voter participation, but there will probably be augmented, heavily Democratic minority turnout to balance it. Additionally, some white voters, particularly those with higher incomes and levels of education who may have voted for Romney, might have a hard time pulling the lever for Trump.” 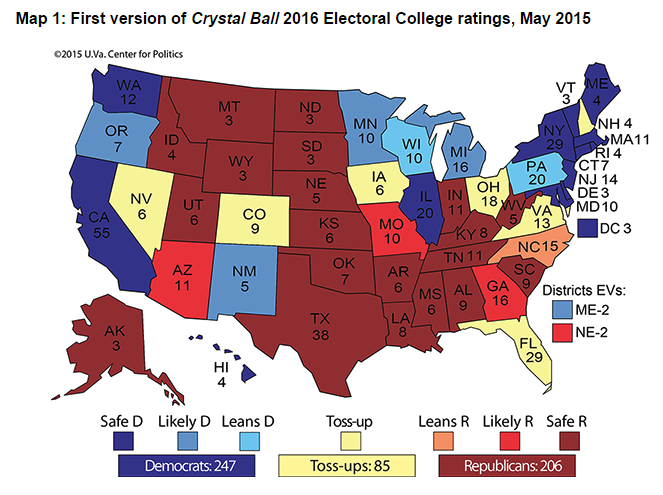 Under the Trump scenario, however, there are no toss-ups. Democrats would take 347 electoral votes while Republicans received 191. That map is incredibly similar to the 2012 contest between Obama and Romney. The only state that would switch is North Carolina, which Romney carried by just two points. 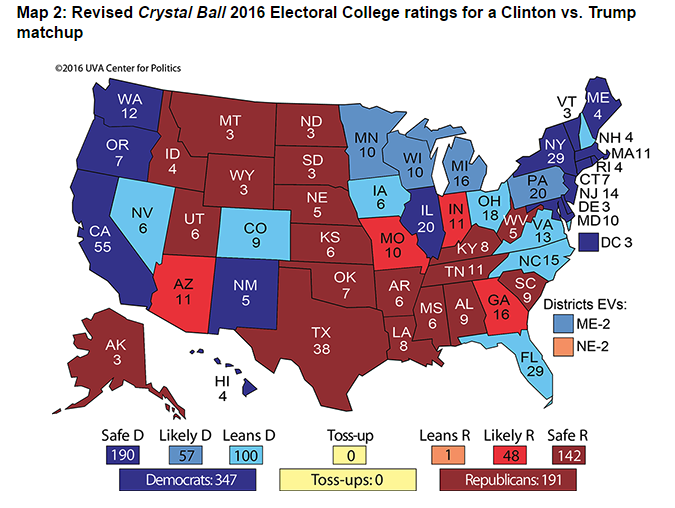 There are 538 total electoral votes. It takes a simple majority, 270, in order to win the presidency.