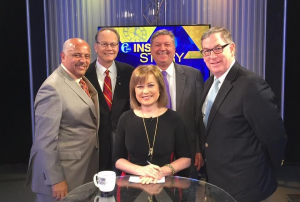 It’s happening everywhere. Dangerous addiction — and the culprit could be as close as your medicine cabinet…powerful painkillers leading to addiction. Now a local company says they have a cutting edge solution…a unique way to kill the cravings. That, plus a push for women candidates with the President of EMILY’s List…and job training that’s getting a lot of people in our area on the payroll.

We have a very special show this week two of the four Democratic candidates for U.S. Senate are in the studio for Face the State with Robb Hanrahan. Katie McGinty and John Fetterman are on the show this week. Tony and Charlie will be in as well for a political analysis as the presidential campaign begins to sweep through Pennsylvania.

Host Monica Malpass at the Insiders discuss the snap, crackle and pop of the pro-soda tax and the fizzle of the anti-soda tax debate. Plus they weigh in on the PA Attorney General and PA Senate races as flurry of new endorsements from the White House are confirmed. Topics also discussed include current AG Kathleen Kane hiring former Montco D.A. Bruce Castor as a defense attorney, Judge Eakins gets to keep his pension after retiring, which Presidential candidates have the edge in PA, and reforming the criminal justice system in wake of President Obama commuting dozens of life sentences for low-level drug offenders. This and more…Catch the Inside Story…Sunday at 11:30 a.m.

On this Sunday morning’s broadcast, the political fallout, from Republican Presidential candidate Donald Trump’s controversial comments, this week, about women and abortion.

Our guests are Dana Brown, Ph.D. – Executive Director of the Pennsylvania Center for Women & Politics, and Assistant Professor of Political Science, at Chatham University,  Heather S. Heidelbaugh, Esq. – Equity Partner at Leech Tishman Fuscaldo & Lampl LLC, former Republican member-at-large of Allegheny County Council, Republican conservative, and a member of the advisory board of Chatham’s Pennsylvania Center for Women & Politics, and Kristin Kanthak, Ph.D. – Associate Professor of Political Science, at the University of Pittsburgh, and Co-Editor of the State Politics and Policy Quarterly.

Please join Ken Rice and David Shribman, for this spirited discussion – Sunday morning at 11:30 a.m., right after CBS’ “Face the Nation”, on the “KD/PG Sunday Edition”, on KDKA-TV!

WGAL Channel 8 (Harrisburg and Lancaster) Sunday, April 3rd at 11:30 AM

This week’s Pennsylvania Newsmakers features Robert Swift of Times-Shamrock Newspapers, and Mary Wilson of PA Public Radio, for a timely legislative update. Then, joining host Terry Madonna is David W. Patti, President and CEO of the Pennsylvania Business Council, with a preview of the primary elections. Link here.

On this week’s broadcast, the nationwide battle to raise the minimum wage  achieves a victory, in Pittsburgh, as the area’s largest, non-governmental employee – UPMC (University of Pittsburgh Medical Center) announces plans to improve minimum, starting salaries, for “beginning” positions, at most of its Pittsburgh facilities — to fifteen dollars, an hour – by January, 2021.

Average, service worker pay – at some UPMC hospital facilities – will be greater than that amount – by January, 2019.

We’ll talk with Barney Oursler – Executive Director of Pittsburgh United – a labor activist group – and Josh Malloy – a floor technician, at UPMC/Mercy – about what this move will mean – for the rest of the local workforce. We’ll also look at the role this issue will play, across the country, as an issue, in Campaign 2016.

Then, a merger of two economic development organizations in Washington County – the Mon Valley Progress Council – and the Middle Monongahela Industrial Development Association – into one group – called the Mon Valley Alliance – and what it means, to the struggle to improve economic growth, in that region of Southwestern Pennsylvania.

Finally, we’ll meet an impressive, young entrepreneur, from Johnstown, Pennsylvania – David Luciew — who has developed a product to relieve wrist strain, from frequent use of the computer mouse. His product is called – Wristocat – and a funding initiative on Indiegogo, is helping to make his dream, a reality.