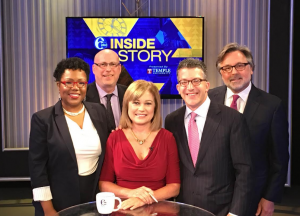 This week we have Secretary of the Commonwealth Pedro Cortes. We’re talking about the upcoming election and the amount of registered voters in PA. Also the security of the voting machines in the keystone state. Tony and Charlie are here for analysis. RJ Harris of WHP 580 is also in to offer commentary.

Host Monica Malpass and our Insiders discuss the FBI raid of documents from powerful Union Leader John Dougherty and  Philadelphia City Councilman Bobby Henon. No formal charges have been filed, but will any arise…and what are the optics of Dougherty’s association with Mayor Kenney? Other topics include the two high-profile cases – chances of a successful re-trial for Monsignor Lynn in the Catholic Church Child Abuse case and an update on PA State Attorney General Kathleen Kane’s perjury trial. The viability of Governor Christie’s re-vamp of NJ education funding, Senator Pat Toomey’s stance on ‘Sanctuary Cities’ and Governor Wolf asking for more money for drug treatments center for PA’s growing opioid addiction crisis.

On this week’s program, the growing heartbreak, over a national, public health crisis that also hits home: death from opioid drug abuse.

We’ll hear the personal account of Sandy Kotwica, from Imperial, Pennsylvania — whose son died, from a heroin overdose – and who is now speaking out, about this issue, and providing support for other families, who are dealing with this tragedy.

Karen A. Hacker, M.D., M.P.H. – Director of the Allegheny County Health Department – talks about a change, in the way drug abuse is now, increasingly, being viewed – by both the public and government – as a public health issue, as much, as a law enforcement concern.

Also, with us, is Marian Luisi – from Dormont, Pennsylvania – a woman, whose nephew died from a heroin overdose, and who is now the interim director and a volunteer for the Pittsburgh chapter of “Not One More” – a non-profit organization that supports those recovering from drug addiction, and families of those either affected by the disease, or who have lost loved ones, who have died from drug overdoses.

Don’t miss this important broadcast – Sunday morning at 11:30 a.m., right after CBS’ “Face the Nation”, on the “KD/PG Sunday Edition”, on KDKA-TV.

On this week’s broadcast – welcome news, about a changing trend, in Pittsburgh’s population:
Unlike the 1980’s-1990’s – when young people were leaving the area – Pittsburgh is seeing a surge in the population of millennials! We’ll talk with Allyce Pinchback – Chair, of the Board of Directors of the Pittsburgh Urban Magnet Project – PUMP – which is marking twenty years of engaging with a younger population – first – to keep them in town – and, now – to welcome millennials, who are moving here – because of the quality of life and good, upscale jobs, provided in “eds & meds” and high-tech. We’ll also ask Pittsburgh City Councilman Dan Gilman (D)8th District (Point Breeze) why millennials’ presence in our area, also means improved revenues, for the city.

Then, the story of an O’Hara Township biotech firm, that is in the midst of important, clinical trials – for its groundbreaking cell therapy, to improve the quality of life of those suffering from urinary incontinence. Ryan Pruchnic – Vice-President of Operations for Cook MyoSite Incorporated – joins us – with details of this firm’s continuing efforts to win FDA approval, for its treatment of this difficult medical problem.

Finally, the Pittsburgh school district is making a concerted effort to diversify its workforce – especially, teaching. Brian Glickman – Director of Talent Recruitment for the Pittsburgh Public Schools – and LouAnn Zwieryznski – Principal, at Westinghouse 6-12,in Homewood-Brushton (formerly known, as Westinghouse High School) – talk with Paul Martino, about the disparity between a school district with a student population that is primarily non-white, and a teaching staff that is 84-percent white. Find out how the school district is expanding its search for teaching candidates – out of town – and why teaching could be a lucrative career, for aspiring, minority college students.