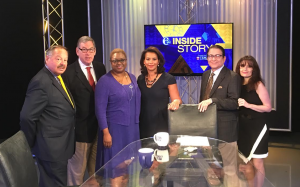 This week we are hearing from the experts about dieting. What works and what doesn’t. We’ll hear from local scientists about the latest research and we talk about a diet fad that could be the real deal. Rosemary Connors is our host.

We have Tony and Charlie in for budget analysis. John Micek from the Patriot-News is also in for commentary.

Host Tamala Edwards speaks with Rev. Leah Daughtry, CEO of the Democratic National Convention about preparations for the big event, possible protests and how the DNC can quell and include unrest amongst Sanders’ supporters. Other topics with the panelists include the threat of terrorism at the DNC, a tight PA Senate Race between McGinty and Toomey, and did NJ Governor Christie backtrack on an election pledge as the state cuts sales tax but adds a gas tax?  Catch the Inside Story…Sundays at 11:30 a.m.

June 30 is the end of the fiscal year, and the traditional day that a budget for the new fiscal year is passed. The House and Senate have passed different versions of a budget bill. Meanwhile, the House rejected a bill which would have allowed the Dept. of Conservation and Natural Resources to enter into agreements with private entities to develop state parks. Other bills, such as the statute of limitations for civil suits for child sexual offenses are also moving, but there is still no tax bill or fiscal code bill to pay for the projected 5 percent increase in the budget. Our guests this week are: Jan Murphy, Editorial & Opinions Page Editor with Pennlive & The Patriot-News; John Micek, Editorial & Opinions Page Editor with Pennlive & The Patriot-News, R.B. Swift with Times-Shamrock Communications and Angela Couloumbis, with the Philadelphia Inquirer. Our host this week is Brian Lockman.

Back, in 1971, President Richard Nixon signed the National Cancer Act – in which the aim was to launch the same commitment “that split the atom, and took man to the moon”, to be turned toward conquering cancer – which was the second-leading cause of death in the United States.

So many years, later,  what progress has been made, in the fight against cancer?

This past week, hundreds of leading cancer experts joined Vice-President Joe Biden, at Howard University – for the first “Cancer Moonshot Summit” – featuring prominent cancer researchers and oncologists, from around the country – some, participating, at the local level – to talk about new approaches and funding needs – to more effectively prevent, diagnose, treat, and cure cancer. Biden lost his son, Beau, last year, to the disease.

We’ll talk with David S. Parda, M.D. – an oncologist, and the Chair of the Allegheny Health Network Cancer Institute – and Marina Posvar – a two-time, cancer survivor – herself, Patient Navigation Coordinator, at the Hillman Cancer Center (part of the UPMC Cancer Centers, and the University of Pittsburgh Cancer Institute), and a participant, in this week’s “Cancer Moonshot Event” – about what must be done – to strengthen the resources, in the battle against cancer, and help patients, and their families, in the struggle against this disease.

Please join Jon Delano and John Allison, for this important discussion – on the “KD/PG Sunday Edition” – Sunday morning at 11:30 a.m. – right after CBS’ “Face the Nation” – on KDKA-TV, and have a safe and Happy 4th of July holiday weekend!

This week’s Pennsylvania Newsmakers features a business panel consisting of Fred Anton, CEO of the Pennsylvania Manufacturers’ Association, and Gene Barr, President and CEO of the Pennsylvania Chamber of Business and Industry, who discuss the state budget and the various tax proposals to fund it. Then, joining host Terry Madonna is Brian Roche, Anchor and Consumer Reporter for WGAL-TV, for a report on consumer scams currently in operation. Link here.

Take a break from budget analysis and politics to see how your favorite Independence Day cook-out items are made! PMA’s Carl Marrara travels to Nottingham, PA to visit Herr Foods, maker of Herr’s Potato Chips. Witness how these delicious snacks are made and hear about the history of the company from Ed Herr. David Taylor then features a newsmaker interview with Dick Yuengling, owner of D. G. Yuengling & Son, America’s oldest operating brewery since 1829. While in Pottsville, David gets an exclusive access tour of the historic brewery.

Frustrated, over the lack of progress, in Congress, on gun control legislation – especially, in the wake of the Orlando, Florida shooting massacre at a gay nightclub – the worst, single act of domestic terrorism in the country’s history — some U.S. House Democrats staged an old-fashioned, “sit-in”, on the House floor, last month, to dramatize their cause. Republicans called it, a “publicity stunt.

What’s likely to happen, when members of Congress return to work, this coming week, after the holiday?

Jon Delano talks with Rep. Mike Doyle – (D)14th Congressional District – including the City of Pittsburgh – who took part in that sit-in — about efforts to reach some agreement on legislation to address the series of mass shootings, in America. We’ll also hear Doyle’s thoughts on Donald Trump’s visit to Monessen, Pennsylvania, this past week – and the need for stronger enforcement of foreign trade laws.

Then, we’ll preview an exciting event that will take place – this month – at Schenley Plaza – right in the heart of Oakland – the “Sand City Spectacular”! Ten of the finest sand sculptors in the world will each receive forty tons of sand – to make original sand creations.

Jon Delano talks with Michael Dongilli – President of Vivid Pittsburgh – producers of the event (July 9th-10th) – and Jill Harris – a sand sculpting artist, from Melbourne, Florida – who is participating in the competition.

KDKA-TV and Pittsburgh’s CW are media sponsors, of this production.

Finally, “Behind the Screams” – a wonderful glance, at the history of Southwestern Pennsylvania’s jewel – Kennywood Park – including its amazing roller coasters, and other rides.  Jon Delano and author Brian Butko look back, on some wonderful Kennywood memories – contained in a new, pocket-sized edition of “Kennywood Behind the Screams – Pocket Edition” – recently published. We’ll show you some great pictures, that should take you back, to your school picnic days.

Please join Jon Delano, Sunday morning at 6:30 a.m., for “The Sunday Business Page” – on KDKA-TV – and have a safe, Happy 4th of July weekend!