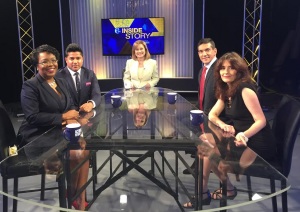 Pre-empted by the French Open.

This week we talk to State Sen. Ryan Aument of Lancaster County about the budget, the Presidential race and much more. Tony and Charlie are on the show this week again offering up questions and analysis. John Micek of the Patriot-News is also on the Program for commentary.

Host Monica Malpass and our Insiders discuss the new plans emerging to encourage residents to stay in town for the DNC. Topics include McGinty amending her statement about attending college, the perseverance of the soda tax debate, and the possibility of Muslim holidays being added to the Philadelphia school system.

This Sunday morning at 11:30 a.m., on KDKA-TV’s “KD/PG Sunday Edition”, with KDKA-TV News Anchor Stacy Smith and David Shribman, Executive Editor of the Pittsburgh Post-Gazette:
On this week’s broadcast, a remarkable interview with Linda S. Lane, Ed.D. — Superintendent of the Pittsburgh Public Schools — who is stepping down from her post, at the end of the month.

Hear her reflections, on the financial state of the Pittsburgh school district, recent program initiatives for students — including everything from science and technology, to bringing back some music programs, that had previously been cut — and her thoughts on the remaining challenges of segregation and the impact of violence (fifteen students have been killed, since she became superintendent) on the Pittsburgh Public Schools.

This week’s Pennsylvania Newsmakers features State Auditor General Eugene DePasquale (D) who discusses unanswered child abuse hotline calls, the debt of the Penn Hills School District, and the cost of not bidding student transportation services. Then, joining host Terry Madonna is Brad Bumsted of the Pittsburgh Tribune-Review, for an update on the forthcoming review of the pornographic email scandal and the resignation of Chuck Ardo, Attorney General Kathleen Kane’s press secretary. Link here.

On this Sunday’s broadcast – Pittsburgh is a “winner”, in this year’s Stanley Cup Championship finals between the Penguins and the San Jose Sharks, regardless, of the final score! Craig Davis, President and CEO of Visit Pittsburgh – the city’s convention and visitors’ bureau – talks with Paul Martino about the economic bonanza and positive publicity about Pittsburgh – coming from the playoffs.

Then, we’ll meet a graduate of the University of Pittsburgh, whose savvy marketing campaign for her Katz Graduate Business School class, won the praise of the United States Golf Association, as well as an opportunity to work at this month’s U.S. Open, at Oakmont Country Club. Melissa Mele and Robert J. Gilbert, Ph.D. – Clinical Associate Professor of Business Administration, Marketing, and Business Economics, at the University of Pittsburgh’s Katz Graduate School of Business – discuss Melissa’s creative approach to attempting to attract millennials, to the game of golf!

We know that Hamilton’s image is on the ten dollar bill – but who was the REAL Alexander Hamilton? He was mortally wounded, in a duel, with Vice-President Aaron Burr – and later died, of injuries, from that incident!

Andy Masich has the fascinating details, and Dr. Peter Cooke tells us about CMU’s impressive efforts to support the teaching of drama – in public schools, in America. Marilyn G. McCormick of Detroit’s Cass Technical High School won the 2016 Excellence in Theatre Education Award, sponsored by Carnegie Mellon University, The Broadway League and the American Theatre Wing. The award will be presented at the 70th Annual Tony Awards on Sunday, June 12 th, on CBS & KDKA-TV.

Please join Paul Martino – Sunday morning at 6:30 a.m. – for “The Sunday Business Page”, on KDKA-TV – and, have a great weekend!