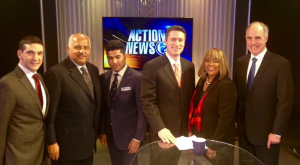 Our guest this week is Philadelphia Mayor Jim Kenney. He will discuss his new city budget.

We have Rep. Dan Frankel from Pittsburgh. Tony May and Kevin Harley are in this week to give political analysis. We’re talking about the LBGT Discrimination bill and the state budget.

Host Matt O’Donnell sits down with PA Senator Bob Casey (D) to discuss the state of presidential politics, ISIS financing, the PA heroin crisis and SCOTUS. But who will he endorse for in the PA Democratic Senatorial Race? Next – our Insiders tackle the backlash to Gov. Christie backing Trump, Mayor Kenney’s proposed Soda Tax and how the PA budget impasse is progressing…or not. Catch the Inside Story on 6abc, Sunday at 11:30 a.m.

On this Sunday’s broadcast, the aftermath of the release, this week, of the results of a Pennsylvania state grand jury investigation – showing that over a forty-year period, hundreds of children were sexually abused, by at least fifty priests and other church personnel – in the Altoona-Johnstown Catholic Diocese.

Pennsylvania Attorney General Kathleen Kane said these findings were NOT an indictment of the Catholic Church – as an entity. She promised that her office will continue to investigate this case – which includes not only the crimes that were allegedly committed, but also, a cover-up, by leadership of that Diocese, to prevent the cases of abuse from being revealed to proper religious and legal authorities.

Our special guest – this Sunday – is David A. Zubik, DD – Bishop of the Catholic Diocese of Pittsburgh – who has expressed sorrow over this case, and who will be leading a “Service of Apology” on Monday, March 21st – at Pittsburgh’s St. Paul Cathedral, in Oakland – which – in part – will provide the opportunity for those “who have been harmed by the Church, in any way” to pray with him.

The Pittsburgh Diocese is NOT involved in the Altoona-Johnstown Diocese sexual abuse scandal.

Please join Ken Rice and John Allison, for this important broadcast – Sunday morning at 11:30 a.m.,–  on the “KD/PG Sunday Edition” — right after CBS’ “Face the Nation” – on KDKA-TV

WGAL Channel 8 (Harrisburg and Lancaster) Sunday, March 6th at 11:30 AM

This week’s Pennsylvania Newsmakers features State Senator Rob Teplitz (D-15th District) who weighs in on the referendum to increase the retirement age for judges to 75, and redistricting. Then, David Wenner of Harrisburg Patriot News/PennLive discusses medical marijuana. Finally, Patrick Conway, President and CEO of the Pennsylvania Credit Union Association, and T.J. Adkinson, a member of the PCUA’s Young Professional Leadership Council, join host Terry Madonna for a discussion of millennials and their financial services. Link here.

Downtown Pittsburgh’s Market Square is in the midst of a big revitalization. One of the crucial pieces of the project is a brand-new, Hilton Garden Inn Pittsburgh Downtown, which opened, this week, and has added 196-more hotel rooms, to Downtown Pittsburgh. We’ll talk with the developer of this, and other major Downtown Pittsburgh properties – Lucas Piatt – President and Chief Operating Officer of Millcraft Industries – about his latest achievement.

Then, a new weapon, in the fight against the “Brain Drain” in Pittsburgh (when some of the best and brightest of our college and university students graduate – and then, look for jobs – elsewhere) – developed by the University of Pittsburgh Graduate School of Public and International Affairs (GSPIA)’s Johnson Institute for Responsible Leadership.

Under the Institute’s leadership program – students become engaged with corporate boards and non-profits, in the community, and are also connected to potential employment, that will keep them in our area.

Our guests are Kevin Kearns, Ph.D. – Director of the Johnson Institute for Responsible Leadership – and Marina Duane – a recent graduate of both the Institute and the Graduate School of Public and International Affairs at Pitt, who is now working as a specialist, in the Office of Data Analysis, Research, and Evaluation – at Allegheny County’s Department of Human Services.

Finally, the legacy of Pittsburgh’s most famous “neighbor” – public television’s Fred Rogers – lives on – through Pittsburgh’s “Good Neighbor Awards” – which will be presented on March 16th, through the sponsorship of the United Way and the Fred Rogers Company. These awards will honor ten, local organizations who help to make Pittsburgh a “very special” place – through their commitment to the workplace and community volunteerism.

Fred Rogers reminded us, some years ago, of his own mother’s advice: that even, during times of disaster, “look for the helpers. You will always find helpers – so many caring people, in this world.”

Our guests are Rebecca Lucore – Chief of Staff of Covestro, LLC—a company that is receiving a “Good Neighbor” Award – and Paul Siefken – Vice-President of the Fred Rogers Company.