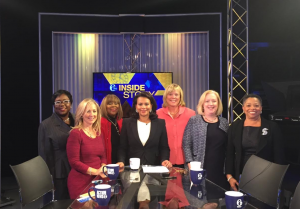 New Jersey Congressman Donald Norcross will discuss his legislation which would reform the VA so that veterans can access any hospital of their choosing.

State Senator Richard Alloway is our guest. Tony, Charlie and R.J. Harris are here for commentary.

Host Tamala Edwards hosted a panel of ALL WOMEN for a special edition of ‘Inside Story’ about the upcoming Pennsylvania Conference for Women 2015 happening on Thursday, November 19th at the PA Convention Center in Philadelphia. The Ladies discussed all women-centric topics including pay equity, how to negotiate a raise, the difference between a mentor vs. a sponsor, and tips on striving for Work/Life/Balance. Catch this special Inside Story on professional development for women THIS Sunday at 11:30 a.m.

As Pennsylvania’s state budget impasse continues into a fifth month, a ‘tentative framework’ on education funding was agreed to this week, raising hopes a budget agreement will be in place by Thanksgiving. Meanwhile, the Special Committee on Senate Address held a public hearing with three district attorneys. The topic was their opinions on Attorney General Kathleen Kane’s ability to do the duties of her office while her law license is temporarily suspended. Those topics and other news from the state capitol will be discussed with this week’s guests Dennis Owens, with ABC27 News; Karen Langley, with the Pittsburgh Post-Gazette; and Chris Comisac, with Capitolwire. Our host this week is Brian Lockman. Link here.

This Sunday morning at 8:30 a.m., on KDKA-TV’s “KD/PG Sunday Edition” broadcast – the serious problem of hunger and food insecurity in America, and our OWN community. We’ll illustrate personal proof of the need – and tell you why KDKA-TV’s “Turkey Fund” is so essential, to the thousands of people that it serves.

Our guests include Gloria Wallace, of Homestead, Pennsylvania – single mother of three children, and on disability, Donna Little – Executive Director of the Rainbow Kitchen, in Homestead, Linda Davis, of Swissvale, Pennsylvania – widowed senior citizen on a fixed income, and Rachel Schneider – Advocacy Coordinator for the Greater Pittsburgh Community Food Bank.

We’ll tell you how the “KD Turkey Fund” works, and how you can help provide so many families in need, with a turkey, for their Thanksgiving.

WGAL Channel 8 (Harrisburg and Lancaster) Sunday, November 15th at 11:30 AM

This week’s Pennsylvania Newsmakers features an interview with State Senator Rob Teplitz (D-15th District) on the framework to resolve the state’s late budget and his legislation to assist veterans. Then, joining host Terry Madonna are State Representative Stan Saylor (R-94th District) and David W. Patti, President and CEO of the Pennsylvania Business Council, to continue the conversation about the budget framework and discuss the need to expand vocational training. Link here.

On this Sunday’s broadcast – the political impact of President Obama’s decision to reject the Keystone XL Pipeline proposal – which would have carried petroleum from Canada, through the Midwest – to refineries along the Gulf Coast. We’ll talk with Aimee Curtright, Ph.D. – RAND Corporation’s Senior Physical Scientist, Associate Research Department Director, in RAND’s Engineering and Applied Sciences Department, and Professor at the Pardee RAND Graduate School campus, in Pittsburgh.

Then, we’ll mark the 50th anniversary – this past week – of an event that plunged much of the Northeast – including New York City – into darkness – for thirteen hours: the Great Blackout.

What caused that major power outage – which stretched into New England and Canada – and what’s changed – since then – to provide better protection against a similar occurrence?

It’s an enlightening interview, that also considers new challenges the power grid system may be facing – fifty years after the Great Blackout – including the threat of terrorism and hacking of the system.

Finally, we’ll look at the results of a special study, that measured the wellness impact of the presence of a supermarket in Pittsburgh’s Hill District – which suffered without a grocery store, for thirty years. Two years, after the opening of a Shop ‘N Save – how has that supermarket changed the community’s eating and buying habits, as well as its attitude about the neighborhood?

Our guests are Tamara Dubowitz – Senior Policy Researcher at RAND Corporation and its Pardee Graduate School in Pittsburgh – which conducted the study – and Cheryl Hall-Russell – President and CEO of Hill House Association – who also oversees the Hill House Economic Development Corporation – which worked so hard, to bring the Shop ‘N Save to Pittsburgh’s Hill District.